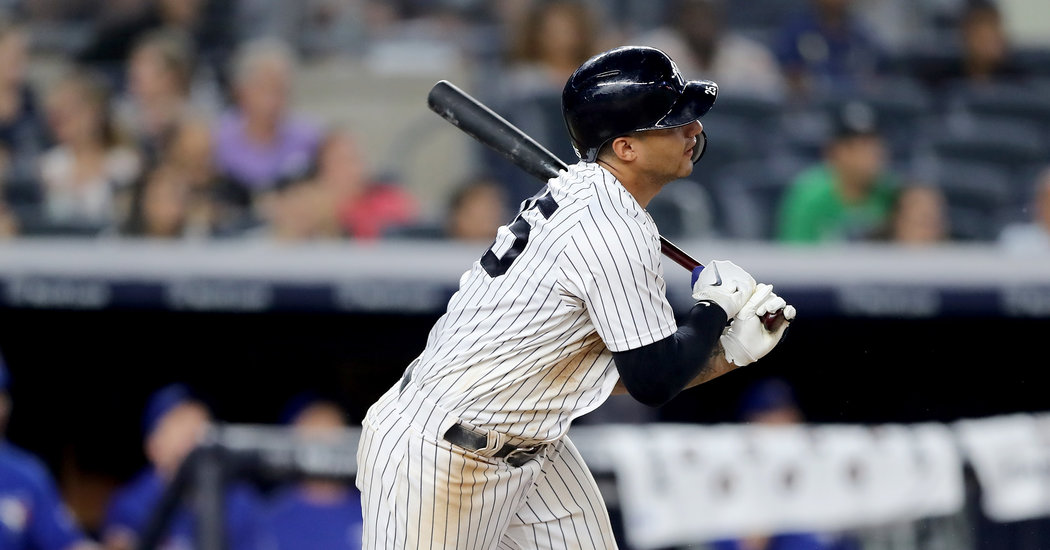 For a team that prides itself on its power, bills itself as the Bronx Bombers and leads Major League Baseball in home runs, this was the smallest variety of small ball: a run scratched out with a walk, an old-school hit-and-run single, and an infield out.

It was not the kind of baseball, we are often told, that brings fans to the ballpark these days or persuades them to sit in front of their television sets. According to popular wisdom, it is the variety that is more likely to drive young fans away from the game.

The exit velocity of the game-deciding groundout was unimpressive, a mere 89.8 miles per hour, or six m.p.h. slower than the pitch it originated with. The launch angle was in the negative numbers, and according to Statcast, the ball traveled all of 143 feet, from Gleyber Torres’s bat to the glove of Toronto shortstop Richard Urena.

Compared with the rocket hit by Giancarlo Stanton two innings later, a high-arcing rainbow that traveled an estimated 431 feet and landed in a remote section of the right-center-field bleachers beyond the Yankees’ bullpen, Torres’s groundout appeared downright puny.

And yet, that innocuous-looking run, scored by the Yankees in the fifth inning Friday night, was enough to earn them a much-needed — and rain-shortened — 7-5 victory over the Toronto Blue Jays at Yankee Stadium, ending a two-game losing streak in which their powerful bats went largely quiet.

The kept the margin between them and the first-place Boston Red Sox at 10 ½ games in the American League East race.

One batter after Stanton’s home run, his 31st of the season, the game was halted because of a sudden, heavy rainstorm. After a delay of 1 hour 25 minutes, the game was called and declared official with one out in the bottom of the seventh.

“We got a heads-up from the umpires that it was going to get real windy and nasty around 9:30,” Manager Aaron Boone said. “The original thought was we could play after 11:00. We didn’t know for sure.”

The Yankees were forced to climb out of a 4-0 first-inning hole dug for them by starting pitcher Lance Lynn, with the help of Neil Walker, an infielder by trade forced into service as an outfielder by a rash of injuries.

Lynn, who had pitched well in three appearances since coming to the Yankees from the Minnesota Twins in a trade for Tyler Austin, struggled with his command in the first inning, walking three batters and allowing run-scoring singles to Kendrys Morales and Kevin Pillar and a two-run single to Aledmys Diaz.

Pillar’s hit was a seemingly catchable pop fly that dropped in front of an onrushing Walker, playing right field in place of Stanton, who has been relegated to designated hitter duty for the past 10 games by a sore hamstring.

The Yankees got two of those runs back in the second inning off Jays starter Marcus Stroman on a triple by Didi Gregorius and a double by Miguel Andujar, and Walker compensated for the fielding trouble with a three-run homer in the bottom of the fourth for a 5-4 lead.

“Marcus started out really strong,” Boone said. “But we had quality at-bats up and down the lineup and made it really difficult for him.”

Stroman, who came in on a career-high six-game losing streak and had been pounded for eight runs in five and one-third innings by the Yankees in April, left the game after four innings, but the Blue Jays tied the game in the fifth on an R.B.I. single by Devon Travis that chased Lynn from the game.

In the bottom of the inning, Aaron Hicks drew a leadoff walk and, after a flyout by Gregorius, Andujar deftly stroked a 1-2 pitch on the ground into right field — with Hicks running on the pitch. It was not a true hit-and-run; Hicks was simply trying to steal second. But the effect was the same. He easily made it to third, and then was able to cruise home on Torres’s groundout.

“That’s a baseball play right there,” Hicks said, laughing. “You don’t see those too often anymore.”

After a couple of losses to the Tampa Bay Rays in which the Yankees left a total of 18 runners on base, managed just one hit in 20 at-bats with runners in scoring position and scored a total of two runs, that fifth-inning sequence amounted to a virtual offensive explosion.

In this game, the Yankees’ aggression, usually channeled through their bats, was displayed on the basepaths.

Boone said that Aaron Judge, recovering from a broken right wrist, was too sore after playing catch before the game to take dry swings for the first time since suffering his injury on July 26.

“We’re not going to press it, especially now that we’ve waited this long,” Boone said. “I think all in all it was a good day today. He’ll continue to work and we’ll see where he’s at day by day.”