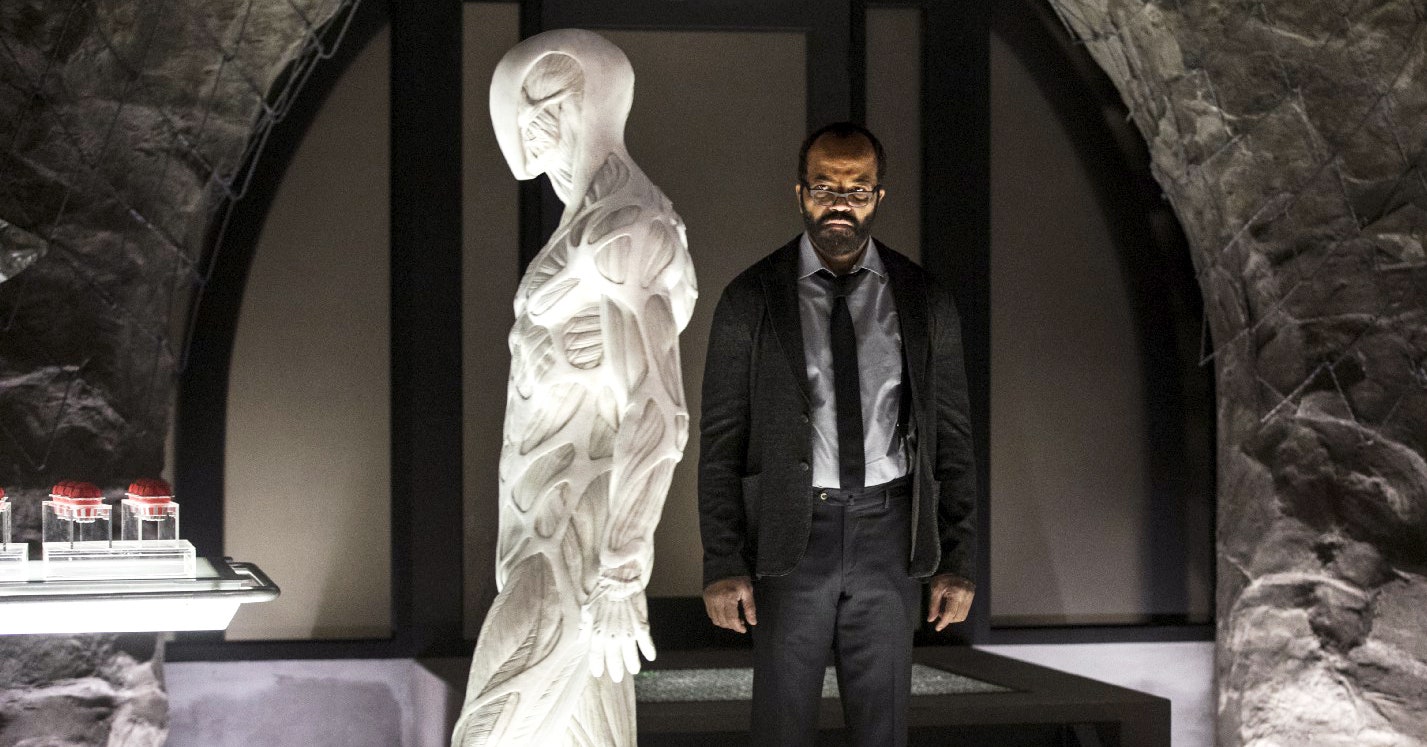 If you thought watching Westworld was like flipping through a blood-soaked college philosophy textbook, you weren’t wrong. Its meditations on the nature of the mind are growing increasingly knotty, putting flesh and bones to the meandering thought experiments that keep undergrads up at night.

Episode 4 of Season 2 opens in a sleek apartment. Jim Delos (Peter Mullan) is going through his morning routine: riding his exercise bike, sitting down to a cup of coffee, and with a trembling hand spilling the cream. The apartment’s walls are one-way mirrors, and on the other side, technicians monitor the conversation. A visitor arrives—William (Jimmi Simpson).

William is there to test him, to put him through his paces. The man before him is his father-in-law, reborn as a host. The original guy died years earlier, and his body has been copied and his mind uploaded into a so-called control unit. Jim Delos wanted—or wants—to live forever.

Westworld has toyed with the idea of robotic rebirth before. Arnold inspired Bernard (Jeffrey Wright). Before the rebellion, the hosts themselves were reborn all the time, but their loops kept them cognitively frozen in place. Robo-Jim is something else—a man designed to pick up exactly where the human Jim left off. With this technological twist, Westworld ventures into the next chapter in cyborg philosophy: If a human’s mind gets copied into an identical-seeming new body, is the person the same? Where, exactly, is our essence of self—is it in our thoughts and memories, the substrate that encodes them, or both? Forget the distinctions between human and host, which have worn thin as the show has progressed. Now the humans want to swap out their own failure-prone bodies for the malleable hardware that can grant immortality. The philosophical minefield that is Westworld just acquired some new explosives.

For now, though, the question of what the robotic embodiment of a human really is only hovers on Westworld’s horizon. Despite Delos Inc.’s engineers’ years of work, robo-Jim isn’t functioning properly, and he begins to glitch after only a few days’ operation. Whenever he starts to deteriorate, the lab techs terminate him and start him over in the same sleek apartment. It’s a hybrid Truman Show–Groundhog Day nightmare. It’s also the original fate of the hosts, applied to a (former) human being.

Rebuilding Jim Delos is turning out to be much harder than anticipated. When a present-day William (Ed Harris), bald and grizzled, goes to visit him in his observation-room apartment, the report is not good. “This is the 149th time we’ve brought you back,” he says. Robo-Jim stays operational for longer now, but he still breaks down. William observes that there seems to be some barrier—something about the mind that resists duplication. Plus, William is having second thoughts. “I’m beginning to think this whole enterprise was a mistake,” he muses. “Humans weren’t meant to live forever.”

The philosophical minefield that is Westworld just acquired some new explosives.

Between the lines is the idea that the “whole enterprise” refers to Delos Inc.’s broader goal. In the future, it wouldn’t merely sell tickets to its savage amusement parks, its product list would come to include immortality. Perhaps it’s like the photos that actual theme parks offer at the end of a roller coaster ride, except instead of taking a snapshot, this place monitors your words and actions and tries to upsell you on your own android replica. “Thanks for visiting Westworld, but before you go, would you like to purchase eternal life?”

But William’s thinking has evolved, and he decides to shut down the experiment. This time, instead of facing termination, Jim is left to stomp around his glass-walled apartment, smashing vases and chairs in a rage. The question is—is William ending his project too late?

Also inhabiting this muddled world of semi-human and semi-host is Bernard, whose brain (aka control unit) is damaged, causing him to become dissociated and increasingly robotic. With his health deteriorating, he floats from scene to scene in a mechanical daze, his memories a jumbled mess.

In this episode he awakens outside a cave, wherein he discovers Elsie (Shannon Woodward), the assistant he thought he had killed on Ford’s orders. He didn’t kill her after all; instead he shackled her to a rock and left her with a pile of protein bars (how thoughtful!). Elsie curses him, but Bernard briefs her on the current state of chaos and they broker an uneasy truce. “Ford wrote a game and we’re all in it,” he tells her.

He remembers in a fractured flashback that the cave has a portal to a secret facility. Descending into it, they discover a lab full of dead technicians and drone hosts, the menacing, all-white superbots that glide around doing lab work but always look ready to kill.

“What were they doing here?” Elsie asks. “I think they were watching the guests,” Bernard replies. Still struggling to make sense of his fragmented memories, Bernard suddenly realizes he’s been to this facility before—Charlotte Hale brought him here earlier, though that might not have been his only visit. “They weren’t building hosts, not exactly,” he says in a halting voice. “The same hardware, but the code is different. The language is not code at all, not really.”

A broken mirror is an apt metaphor—Westworld is supposed to show us who we truly are. But it’s never been a perfect reflection, and Jim’s shattered self suggests that the quest for immortality might ultimately break us.

Behind a locked door in the facility they discover the glass-strewn remains of Jim Delos’ apartment. He’s still there, riding his exercise bike amid the rubble. His face lacerated and caked with blood looking like Sam Neill at the end of Event Horizon, he greets his visitors with a shard of mirror clutched in his hand like a knife. He mutters some cryptic lines about two fathers who are actually one father plus a reflection, but Elsie quickly terminates him. A broken mirror is an apt metaphor—Westworld, as William has often said, is supposed to show us who we truly are. By removing inhibitions and consequences, the park holds a mirror up to our faces, revealing truths that are otherwise occluded by society’s programming. But it’s never been a perfect reflection, and Jim’s shattered self suggests that the quest for immortality might ultimately break us.

A sudden memory jolts Bernard. He recalls that Ford (Anthony Hopkins) had sent him here to print another human. But who was it? (If I were Ford, I would most likely print out … Ford.) On an earlier visit to this facility, Bernard had picked up a small red ball—presumably the data representing some human’s personhood—and slipped it in his pocket. He then magically commanded the drone hosts to kill the lab techs and then themselves. He was the one who caused the carnage in this facility.

Out in the park, the Ghost Nation warriors have rounded up the guests for a forced march. Among them is a familiar figure: Grace (Katja Herbers), the woman who swam from the India-themed park to Westworld. She’s an aficionado not only of the India park but of Westworld, it turns out. She’s even learned the Ghost Nation’s language. She manages to escape with a credulity-stretching sprint past some Ghost Nation toughs. Seemingly unmoved, the warriors continue menacing the remaining humans, including Ashley Stubbs (Luke Hemsworth), the Delos head of security whom they captured last season. With a knife to Ashley’s throat, the Ghost Nation leader says in American English, “You live only as long as the last person who remembers you,” an abrupt meditation on the meaning of life. It’s not just about you, but about your relationships—thanks for the reminder, Ghost Nation! (We’ve met this leader before: In the past—and minus the war paint—he or a human version of him had pitched Logan Delos on a cool new investment opportunity, a project where robots are indistinguishable from humans.) Then poof! The members of the Ghost Nation suddenly disappear, leaving the humans alone.

‘You live only as long as the last person who remembers you.’

The Man in Black, meanwhile, is facing down Confederados with Lawrence (Clifton Collins Jr.). They have returned to Lawrence’s hometown, where his wife and daughter live. (The daughter, if you’ve forgotten, was the person who gave the Man in Black his first hints about how to find the maze.) She ominously tells him, “You still don’t understand the real game we’re playing here. If you’re looking forward, you’re looking in the wrong direction.”

The Man in Black and Lawrence gallop off into the sunset, the most cliché cowboy moment, with open fields and a sky awash in color. But then who is this, riding straight towards them? It’s Grace, sometime after her escape from the Ghost Nation. She looks the Man in Black straight in the eye and says, “Hi, Dad.”

It’s a startling revelation—and it’s not. She’s echoed him in every scene she’s been in. Her motives, however, remain a mystery. The Man in Black’s personal life, and (presumably) the thoughts that keep him up at night, are now shaping Westworld.