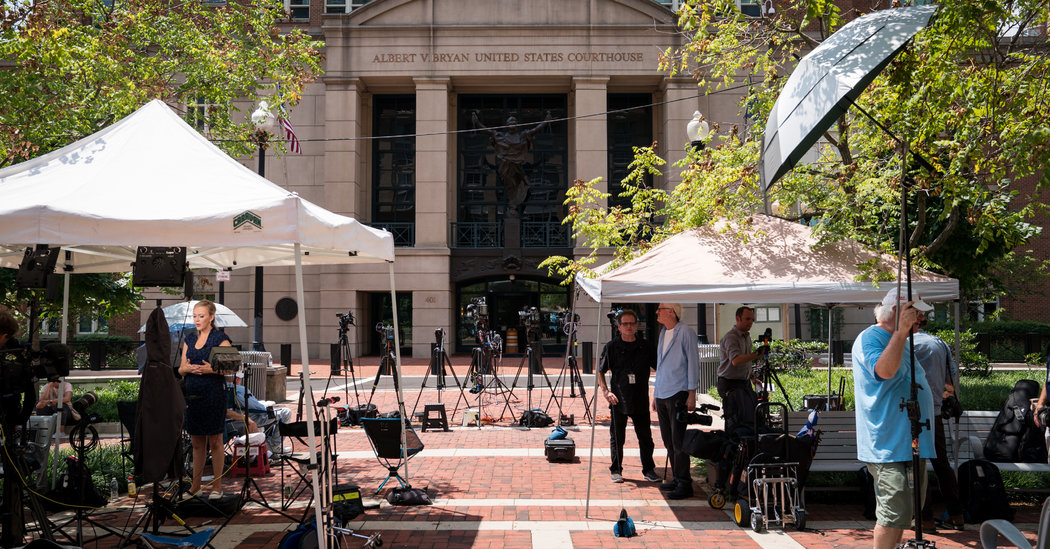 Here are the week’s top stories, and a look ahead.

1. Washington is bracing for the possibility of violence.

White nationalists are marking the anniversary of last year’s violent rally in Charlottesville, Va., with one named after it: Unite the Right II. Their permit allows up to 400 people to gather for two hours this evening at Lafayette Square, facing the White House.

An antiracism group was granted a permit for more than three times that number. Security forces intend to separate them with physical barriers. Other counterprotesters have permits for elsewhere in the city.

Although no rally is planned in Charlottesville, above, Virginia’s governor declared a state of emergency.

2. The tax and bank fraud trial of Paul Manafort, above, has been a bit more exciting than the norm for white-collar crime.

The presiding judge, T.S. Ellis III, demands both precise questioning and a breakneck pace. The prosecution expects to rest its case Monday. No word from the defense yet.

3. Voters in Kansas, Michigan, Washington, Ohio, Missouri and Hawaii had their say.

Over all, Republicans are seeing a tough fight to keep the House, pinning their hopes on well-funded outside groups and a slashing negative message about Democrats.

In Michigan, there were two races for the House seat being vacated by John Conyers Jr. Brenda Jones won the primary to fill out the rest of Mr. Conyers’s term. Rashida Tlaib, above celebrating, won the right to run for the seat for the next congressional cycle. (She’s poised to become the first Muslim woman ever elected to Congress.)

The recount is continuing in the too-close-to-call gubernatorial primary in Kansas. Kris Kobach, a hard-right conservative candidate endorsed by President Trump, is secretary of state, but said he would recuse himself from overseeing the counting.

4. Paul Ryan’s tenure as speaker of the House is almost up.

Mr. Ryan’s official reason for leaving at the end of the year, announced in April, was that his “family clock was ticking” and he no longer wanted to be a “weekend dad.”

5. Internationally, the Trump administration set its sights — and new sanctions — on Turkey, Iran and Russia.

The move against Turkey, prompted in part by its detention of an American pastor, has reverberated through the global economy and raised fears of market volatility.

As for Iran, above, the administration is betting that restoring the sanctions in effect prior to the 2015 nuclear accord will force Tehran to curb its weapons program. But the decision further strained relations with European allies.

And Russia’s ruble tumbled, with investors unnerved by new sanctions in response to the attempted assassination of a former Russian spy and his daughter.

6. Also heating up: the planet.

The trend is clear. This year is shaping up to be the fourth-hottest on record, and 17 of the 18 warmest years since modern record-keeping began have occurred since 2001.

“It’s not a wake-up call anymore,” said Cynthia Rosenzweig, who runs the climate impacts group at the NASA Goddard Institute for Space Studies. “It’s now absolutely happening to millions of people around the world.”

Fires are still burning in parched California. We ventured into the evacuation zone of the Mendocino Complex fire, the largest in the state’s recorded history.

7. Some of us embrace the good and the bad, in weather and life. Our International Desk brings you two modern profiles in courage.

One is the story of the American couple above. “There’s magic out there, in this great big beautiful world,” wrote Jay Austin, who, with Lauren Geoghegan, set out to bike around the world.

8. Facebook, YouTube, Apple, Google and Spotify decided to remove most of the content generated by the right-wing provocateur Alex Jones, setting off debate over online speech and making the app for Infowars, Mr. Jones’s site, a top download.

Twitter, however, decided to keep Mr. Jones’s account live, drawing ire from users and the company’s own employees.

Times reporters were inside a company meeting in which employees debated the nature of “dehumanizing” speech. In an interview, Jack Dorsey, the Twitter chief executive, said he was “O.K. with people not agreeing” with him.

9. V.S. Naipaul, the Nobel laureate whose books were equally critical of colonialism and postcolonial life in Africa and his native Caribbean, has died at 85.

“He was a walking sack of contradictions, in some ways the archetypal writer of the shifting and migratory 20th century,” our critic writes.

10. What’s a weekend without a strange and most unexpected story?

An airline employee took off in a stolen plane from Seattle-Tacoma International Airport on Friday night.

He crashed, but while the plane was still aloft, officials heard him say: “I got a lot of people that care about me and it’s gonna disappoint them to hear that I did this. I would like to apologize to each and every one of them. Just a broken guy, got a few screws loose, I guess. Never really knew it until now.”

11. Finally, meet First Lt. Marina A. Hierl, the first woman in the Marine Corps infantry to lead a platoon, in our Best Weekend Reads. A look at the cast of “Crazy Rich Asians” is in there, too.

Your Weekend Briefing is published Sundays at 6 a.m. Eastern.

You can sign up here to get our Morning Briefings by email in the Australian, Asian, European or American morning, or to receive an Evening Briefing on U.S. weeknights.

What did you like? What do you want to see here? Let us know at briefing@nytimes.com.