Search for this author in:

Joseph Schlessinger is in the Department of Pharmacology, Yale School of Medicine.

Search for this author in:

Mutations in the gene KRAS are the most frequent drivers of tumour development across the spectrum of human cancers1. Despite this prevalence, mutant KRAS protein has remained an intractable therapeutic target. Writing in Nature, Canon et al.2 describe a small molecule that binds one form of mutant KRAS with high specificity and sensitivity, inhibiting the protein. The authors use animal models to analyse how the inhibitor works, and show that it can shrink tumours in patients. This is among the first evidence of a clinical response to a specific KRAS inhibitor.

KRAS is an enzyme that controls a signalling pathway crucial for cell growth, differentiation and survival. The inactive protein is bound by a guanosine diphosphate (GDP) molecule — replacement of GDP by guanosine triphosphate (GTP) facilitates conformational changes in KRAS that allow the enzyme to bind and activate downstream effector molecules (Fig. 1a). Nearly all cancer-promoting KRAS mutations prevent GTP breakdown, leaving KRAS in a permanently active state3 (Fig. 1b). One such mutation involves substitution of a glycine amino-acid residue for a cysteine residue. The resulting mutant protein, KRASG12C, is found infrequently in various cancers. It is most prevalent in lung cancer, and is responsible for approximately 12% of non-small cell lung cancers4,5.

In the past few years, several irreversible small-molecule inhibitors have been developed6–8 that bind covalently to a pocket in GDP‑bound KRASG12C to inhibit GTP binding. These inhibitors successfully prevent activation of the protein in animal models, but none has had any effect on tumours in patients. Canon et al. characterized another small-molecule inhibitor, AMG 510, that forms a covalent bond with GDP‑bound KRASG12C (Fig. 1c). AMG 510 has similar structural properties to one of the previous inhibitors, ARS-1620, but has one key difference — it binds a structure called a cryptic surface groove that forms in KRASG12C, and so recognizes the mutant protein with high specificity.

The authors showed that AMG 510 inhibits the exchange of GDP for GTP more potently than does ARS-1620. Moreover, AMG 510 strongly inhibits phosphorylation of the protein ERK (a known effector of KRAS activity) in cells harbouring KRASG12C, and impairs cell proliferation. 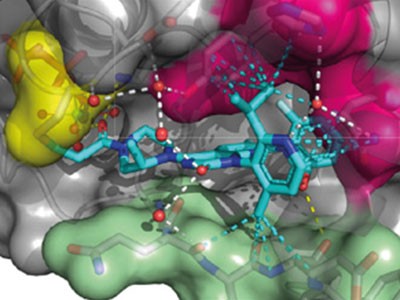 Next, Canon and colleagues turned to mice carrying KRASG12C tumour cells taken from patients. Treatment with AMG 510 at a concentration of 100 milligrams per kilogram of body weight resulted in tumour regression, but the cancer subsequently returned. At 200 mg kg−1, however, AMG 510 triggered permanent tumour regression in eight out of ten mice. Of note, the robust potency with which AMG 510 triggers cell death raises the possibility that it becomes covalently attached to other cysteine-containing proteins, in addition to KRASG12C — something that should be investigated in future, if the molecule is to be regularly used in patients.

Interestingly, mice showed a durable response to the 200 mg kg−1 AMG 510 treatment only if they had a functioning immune system (known as immune competence). In mice lacking the immune cells called T cells, tumours returned. This led the authors to ask whether it would be possible to combine AMG 510 with an immunotherapy called anti-PD-1 therapy, which harnesses the immune system to combat cancer. Indeed, treatment with AMG 510 at 100 mg kg−1 combined with anti-PD-1 therapy resulted in complete tumour regression in nine out of ten immune-competent mice.

Canon and colleagues found that AMG 510 treatment boosted the expression of inflammatory molecules called chemokines in the animals’ tumours. This was associated with an increase in infiltration of the tumours by T cells and dendritic cells, both of which are involved in the immune system’s response to cancer. Furthermore, when the authors reintroduced KRASG12C cancer cells to mice that had been cured by the combination treatment, no tumours grew. This suggests that the combination treatment established a long-term T-cell response to KRASG12C tumour cells. The researchers could also improve the cure rate and efficacy of AMG 510 treatment by combining it with a standard chemotherapy drug or with a drug that inhibits the protein MEK, which acts downstream of KRAS.

These data served as the cornerstone for AMG 510 trials in the clinic. Canon et al. describe clinical results for four people who have non-small cell lung cancer. All four harbour the KRASG12C mutation and were treated with AMG 510. This is a very small number of patients, but the results are promising. In two of the four patients, the cancer stopped growing. The other two showed a partial response — their tumours shrank by 34% and 67% after six weeks. At the point at which the authors stopped collecting data, these patients had been receiving AMG 510 for 39 and 26 weeks, respectively, and were still taking the drug. 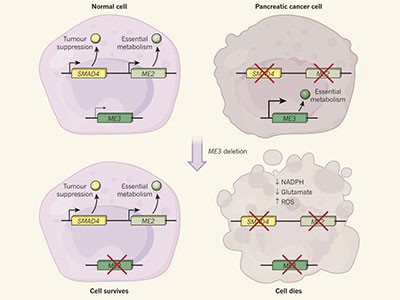 Canon and colleagues’ findings are supported by more clinical results from their group, presented at conferences earlier this year9,10. The conference proceedings suggest that AMG 510 has broad activity in lung cancer, with tumour shrinkage observed in four patients, and cessation of tumour growth in several more. Of note, however, these data were reported at an early stage of the trial, and the results for people treated for colon cancer look less promising at this early stage. It will be interesting to discover the long-term outcomes of the patients treated by Canon and colleagues. It will also be important to investigate whether combination strategies might be effective if these patients develop resistance to AMG 510 treatment.

Many questions remain. Could AMG 510 be more suitable as the first-line treatment for cancers involving KRASG12C than the current standard treatments, which involve chemotherapy or immunotherapy? Could the new inhibitor be effective when cancers have spread to the brain (a major site for secondary tumours in KRAS-mutated cancer), which is associated with a high chance of death? The optimal dose of AMG 510 and any toxicity associated with that dose remain to be determined. In addition, it will be interesting to see how this molecule compares with other such inhibitors in the clinic, including a recently reported11 small molecule called MRTX849.

Nonetheless, Canon and colleagues’ results provide a solid proof of concept that AMG 510 treatment results in cancer-cell death, and highlight a putative mechanism by which the molecule acts. Moreover, the work validates the assumption that it is KRASG12C (rather than another unidentified mutant protein) that drives the cancers that carry this mutation. It also provides support for targeting KRAS therapeutically, and represents a major step towards bringing KRAS inhibition to the clinic. Finally, the authors have revealed an intriguing link between a targeted cancer therapy and immune responses. Further study of this relationship might lead to the discovery of new combination therapies for cancer.

R.S.H. has received honoraria from the following:

He is a member of the board of directors (non-executive/ independent) for Junshi Pharmaceuticals.

An essential round-up of science news, opinion and analysis, delivered to your inbox every weekday.