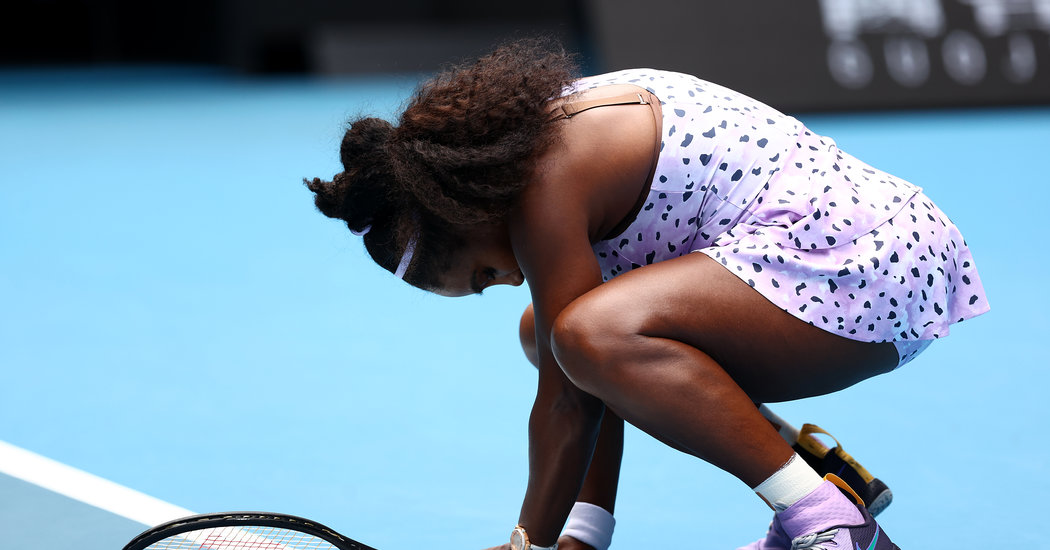 MELBOURNE, Australia — Serena Williams tumbled out of the Australian Open in the third round on Friday, eliminated by an opponent who had previously been one of her least daunting.

At the same time Williams was battling at Rod Laver Arena, her close friend Caroline Wozniacki played the final match of her career at Melbourne Arena, losing to the 78th-ranked Ons Jabeur of Tunisia, 7-5, 3-6, 7-5.

Williams and Wozniacki would have faced one another in the fourth round had both advanced, but underdogs not known for big-stage bravery beat both.

The Williams-Wang match was their first meeting since last September in the United States Open quarterfinals, when Williams had routed Wang, 6-1, 6-0, in only 44 minutes, one of the easiest victories of her long career. Wang, 28, who normally tries to dictate play with her flat, aggressive groundstrokes, did not hit a single winner in that match, seemingly frozen with fear under the floodlights in New York.

In Friday’s rematch, Wang’s readiness to battle, and to assert herself, was quickly apparent. She hung tough on her serve, saving four break points before breaking the 38-year-old Williams in the ninth game for a 5-4 lead, and then holding serve a game later to claim the opening set.

After the match, Wang, who finished with 25 winners, said of Williams: “She’s a really aggressive player; you cannot be only passive, you have to stay with her.”

“I just tried to be more aggressive,” she added.

Williams, when asked what Wang improved in their rematch, focused instead on her own performance.

“Personally I made a lot of errors,” said Williams, who hit 43 winners and 56 unforced errors. “I didn’t hit any of those shots in New York, or in general in a really long time — so that’s good news. I just made far too many errors to be a professional athlete today.”

Wang broke again in the fifth game of the second set for a 3-2 lead, and extended her lead to 5-3. But when she served for the match at 5-4, Williams summoned her best tennis of the afternoon, punishing the serves that Wang aimed at her backhand, and outlasting her in a 24-shot rally to finally convert on her sixth break-point opportunity. She closed the set with a cross-court forehand winner and then threw her arms high in the air.

Williams fired down strong serves to save two break points on her serve in the next game. After Wang held to force a tiebreaker, Williams reeled off four straight points to take it, 7-2.

“I thought, O.K., now finish this off,” Williams said of her mind-set before the third set. “I honestly didn’t think I was going to lose that match.”

Despite the disappointment of failing to finish off the victory in two sets, Wang did not relent. She kept the third set on serve with six holds, then broke Williams and converted her third match point to advance to the fourth round.

The loss for Williams brought a premature end to her latest bid to equal Margaret Court’s record of 24 Grand Slam singles titles, and was her earliest exit at the Australian Open since she lost in the third round to Daniela Hantuchova in 2006. Before reaching the Wimbledon and United States Open finals last year, Williams lost in the third round of the French Open last year, 6-2, 7-5, to the American Sofia Kenin.

But unlike her loss at the French Open, a tournament in which she arrived lacking preparation after months of struggling with a knee injury, Williams appeared to be in fine form in Melbourne, and was the oddsmakers’ favorite for the title. Williams did not play any tournaments last year after the United States Open — she has avoided the fall swing of the tennis season since 2015 — but showed promise early this season, winning her first title in three years at a small WTA tournament in Auckland, New Zealand, which she called a “monkey off my back.”

The larger burden of Court’s record, however, will remain, though Williams said that she still believes she will have the opportunity to equal her mark.

Wozniacki, who spent 71 weeks at the No. 1 ranking starting in 2010 and most recently in 2018 after a long-awaited first Grand Slam title here, had pulled off one last signature victory in the second round, coming back from double-break deficits of 1-5 in the first set and 0-3 in the second set to beat the 23rd-seeded Dayana Yastremska, 7-5, 7-5.

Smiling through tears in an on-court presentation after her loss to Jabeur, Wozniacki joked with self-deprecation that the two-hour, seven-minute match had been an appropriate finale to her career.

“I think it was only fitting that my last match would be a three-setter, a grinder, and that I would finish my career with a forehand error,” Wozniacki said about her weakest stroke. “It was one of those things I’ve been working on my whole career, but I guess it’s just meant to be.”

As she sat down for her news conference, Wozniacki made sure to confirm that the tissues she’d been promised were by her side.

“There’s a lot of emotions, a lot of things I can’t compartmentalize now,” Wozniacki said. “A lot of excitement. A little sadness. Flashbacks to since I was a kid to this moment. The fact that it’s gone so quick — but at the same time it feels like I’ve been out here for a long time. It’s been very special.”

Williams, seething with so much with anger about her own loss that she said she wanted to punch a wall, expressed only sadness about Wozniacki’s exit.

“Guys, I can’t answer Caroline questions, I’m going to be crying,” she said. “She’s one of my best friends in the world. We have a great life for the rest of our lives together, but I’m going to miss her out on tour.”

Williams said she and Wozniacki had commiserated in the locker room after their defeats.

“We were both kind of bummed about our matches,” Williams said. “But, you know, it’s not the end of the world. Things go on. Well, I can play better; I don’t know if she’s going to play any better, any more.”

Williams expressed determination to keep moving forward. Her next opportunity at a Grand Slam will be at the French Open in May; preparations will start immediately.

”I’m definitely going to be training tomorrow,” Williams said. “That’s first and foremost, to make sure I don’t do this again.”