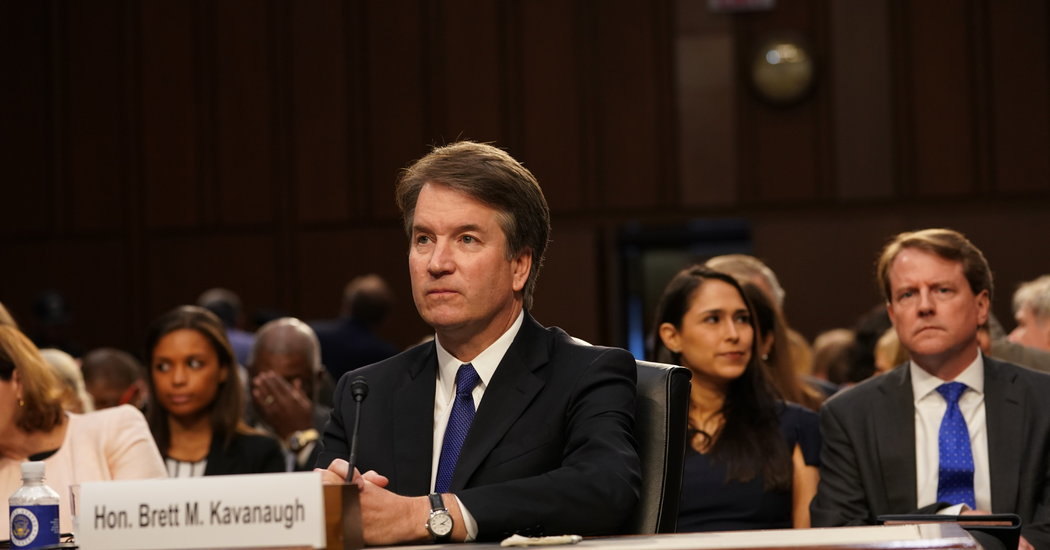 WASHINGTON — A deeply divided Senate voted on Saturday to confirm Judge Brett M. Kavanaugh to the Supreme Court, delivering a victory to President Trump and ending a rancorous Washington battle that began as a debate over ideology and jurisprudence and concluded with questions of sexual misconduct.

The vote, 50 to 48, was interrupted repeatedly by protesters, with the Capitol Police dragging screaming demonstrators out of the gallery as the senators sat somberly at their wooden desks in the chamber below. “This is a stain on American history!” one woman cried, as the vote wrapped up. “Do you understand?”

The final tally fell almost entirely along party lines, with Senator Lisa Murkowski of Alaska — the lone Republican to break with her party — recorded as “present” instead of “no” as a gesture to a colleague, Senator Steve Daines of Montana, who was attending his daughter’s wedding and would have voted “yes.” Senator Joe Manchin III of West Virginia was the lone Democrat to support Judge Kavanaugh.

The final result was expected; all senators had announced their intentions by Friday, after the nomination cleared a crucial procedural hurdle in a 51-to-49 vote.

But while the brawl over Judge Kavanaugh’s confirmation may be over, people on both sides of the debate agree that it will have lasting ramifications on the Senate, the Supreme Court and the nation.

As the senators entered their final hours of debate on Saturday, hundreds of Kavanaugh opponents were massed on the steps of the Supreme Court. They later rushed the barricades around the Capitol and sat on its steps, chanting “No means no!” as Capitol Police officers began arresting them. Women and sexual assault survivors around the country were furious, feeling as though their voices had not been heard.

Inside the chamber, protests erupted as Senator John Cornyn, Republican of Texas, delivered a speech deploring “mob rule” — a reference to the activists and sexual assault survivors who have roamed the Capitol in recent weeks, confronting Republican senators. “I stand with survivors!” one shouted. “This process is corrupt!”

Even some of Judge Kavanaugh’s future colleagues sounded unsettled. On Friday, on the eve of the vote, two of them — Justices Elena Kagan and Sonia Sotomayor — expressed concern that the partisan rancor around his nomination would injure the court’s reputation.

“Part of the court’s strength and part of the court’s legitimacy depends on people not seeing the court in the way that people see the rest of the governing structures of this country now,” Justice Kagan said in an appearance at Princeton University. “In other words, people thinking of the court as not politically divided in the same way, as not an extension of politics, but instead somehow above the fray, even if not always in every case.”

Once confirmed, Judge Kavanaugh will shift the ideological balance of the court to the right, giving it a solid conservative majority. He will replace the retired Justice Anthony M. Kennedy, a moderate conservative who was its longtime swing vote, and at 53 he is young enough to serve for decades, shaping American jurisprudence for a generation, if not more.

Senator Mitch McConnell of Kentucky, the majority leader, was unequivocal about what Republicans had accomplished.

“It is the most important contribution we have made to the country that will last the longest,” Mr. McConnell said in an interview, ticking through two Supreme Court justices and 26 federal appeals court judges confirmed in the last two years.

For Mr. Trump, who has made stocking the federal judiciary with conservatives a signature of his presidency, Judge Kavanaugh’s confirmation will fulfill a campaign promise in the middle of a difficult midterm election. He is already using Judge Kavanaugh’s confirmation process to energize his base; at a recent rally, he fired up his supporters by mocking Christine Blasey Ford, the Northern California research psychologist who accused Judge Kavanaugh of trying to rape her when they were teenagers.

Until Dr. Blasey went public, Judge Kavanaugh’s confirmation seemed assured. But her account — first in an article in The Washington Post and later in riveting testimony before the Senate Judiciary Committee — unleashed a cascade of other allegations and prompted a last-minute F.B.I. inquiry into the judge’s conduct.

Judge Kavanaugh vigorously denied the allegations in his own angry and emotional testimony before the Judiciary Committee. On Saturday, one of his accusers, Deborah Ramirez, who has said Judge Kavanaugh thrust his genitals in her face during a drunken dormitory party at Yale, issued a statement deploring what was about to happen.

“Thirty-five years ago, the other students in the room chose to laugh and look the other way as sexual violence was perpetrated on me by Brett Kavanaugh,” she wrote. “As I watch many of the senators speak and vote on the floor of the Senate I feel like I’m right back at Yale where half the room is laughing and looking the other way. Only this time, instead of drunk college kids, it is U.S. senators who are deliberately ignoring his behavior. This is how victims are isolated and silenced.”

As it did for the past week, the Senate debate on Saturday turned as much on Judge Kavanaugh’s own conduct during his Senate testimony as it did on questions of the law. In the Senate hearing, he called Dr. Blasey’s allegations “a calculated and orchestrated political hit” and directed barbed comments at his Democratic questioners.

“I had concerns at the very beginning of this process, and I fear it more than ever at the end of the process,” Senator Chris Van Hollen, Democrat of Maryland, said on the Senate floor. “Any remaining hope that Judge Kavanaugh could be trusted to be an impartial justice or perceived to be an impartial justice was shattered by his opening statement at his last hearing.”

But Senator Mike Lee, Republican of Utah, who held the floor for a time overnight on Saturday, said those who would question Judge Kavanaugh’s demeanor “certainly didn’t see the same thing I saw, which is someone who was seeking sincerely to defend his own record of public service, his own private conduct against great adversity, in circumstances in which he and his family have been dragged through the mud by no choice of their own.”