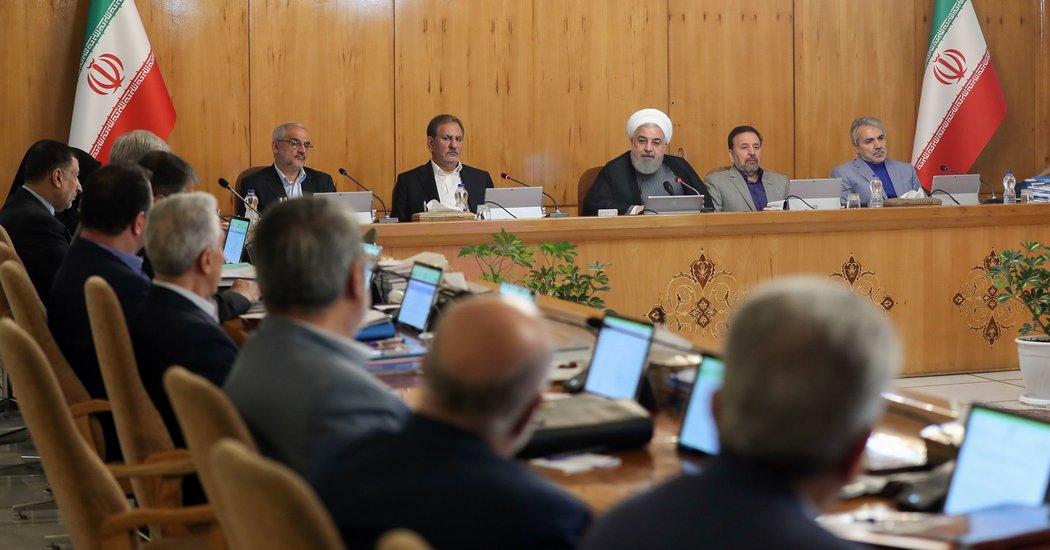 LONDON — Iran will “take the next step” on Sunday and begin to enrich uranium beyond the levels specified under its 2015 accord with the United States and other global powers, President Hassan Rouhani said Wednesday, state news outlets reported.

Mr. Rouhani’s pledge to accelerate the country’s uranium enrichment is the latest step in an escalating confrontation with the United States over President Trump’s withdrawal from the nuclear pact and imposition of crippling economic sanctions on Iran.

On Monday, Tehran increased its stockpile of low-grade enriched uranium above the cap stipulated in the accord. But its announced intention to enrich uranium to a higher level of purity is considered a far more significant breach of the nuclear deal, as it would bring Iran much closer to producing a nuclear weapon.

Iran has maintained over the years that its nuclear program was for peaceful purposes, and that the more highly enriched uranium was intended for use in a reactor that produces medical isotopes.

But to forestall Iran’s decades-long pursuit of the technology to build a nuclear bomb, the United States, the European Union and several world powers agreed in 2015 to lift sweeping economic sanctions on Iran in exchange for limitations on its nuclear activity.

Mr. Trump withdrew from that deal last year, demanding that Iran agree to more stringent limits on its nuclear and conventional military activities. This May, the United States added to its “maximum pressure” campaign against Tehran by moving to block the country’s oil sales anywhere in the world, cutting its exports to around 300,000 barrels a day from 2.5 million. Officials in Tehran have denounced those latest restrictions as “economic warfare.”

The other signatories to the nuclear deal — Britain, China, France, Germany and Russia — have continued to support it and urged Iran to do the same. But Tehran has threatened to stop complying with the agreement unless the European nations take measures to relieve the economic pain inflicted by the United States.

The demise of the pact would revive questions about whether Tehran might seek to develop a nuclear weapon and, if so, whether the United States or Israel might then take military action to prevent that.

Tensions between Washington and Tehran are already spilling out in other ways. The United States was within minutes of launching a missile strike against Iran last month in retaliation for the shooting down of an American surveillance drone, before Mr. Trump reversed the order.

The United States and other allies have also accused Iran of using naval mines to damage a total of six tankers in two attacks around the crucial oil shipping lanes in and out of the Persian Gulf, accusations Iranian officials have denied.

Speaking at a cabinet meeting in Tehran, Mr. Rouhani said that Iran would move on Sunday to enrich uranium to higher levels “in any amount that we want, any amount that is required,” regardless of the limits set by the deal.

“Our advice to Europe and the United States is to go back to logic and to the negotiating table,” Mr. Rouhani said. “Go back to understanding, to respecting the law and resolutions of the U.N. Security Council. Under those conditions, all of us can abide by the nuclear deal.”

In addition, Mr. Rouhani said with new specificity that Iran would also start taking steps on Sunday to restart its Arak nuclear reactor, which could eventually be used to produce plutonium and provide an alternate path to developing a bomb.

Iran had said under the 2015 accord that it had removed the core of the reactor and filled it with cement. If the United States and the other signatories do not provide the sanctions relief they had promised, he said, Iran will return the Arak reactor to “the condition that you say is dangerous and can produce plutonium.”

“We will return to that unless you take action regarding all your commitments,” he said.

The European Union, in its most significant break with the Trump administration, has sought to throw the Iranians the sort of economic lifeline that would persuade them to continue honoring the terms of the deal. But a proposed alternative trading mechanism to help Iran bypass the new American sanctions has largely failed, and Mr. Rouhani had set a deadline of the first week in July for the Europeans to deliver on their promises of help.

As that deadline approached, Iran this week took its first small step beyond the 2015 agreement by surpassing the deal’s cap in its stockpile of low-enriched uranium.

Taken alone, that step does little to bring Iran closer to the potential development of a nuclear weapon. And the stockpile could easily be reduced to compliance by shipping the excess abroad. But the violation of the 2015 agreement nonetheless served as a warning that the pact itself was in imminent danger.

In response, top diplomats from the European Union, Britain, France and Germany released a statement on Tuesday warning that they were “extremely concerned” and that “our commitment to the nuclear deal depends on full compliance with Iran.“

“We are urgently considering next steps” under the terms of the 2015 agreement, the Europeans said, though they did not elaborate.

Mr. Rouhani’s statement on Wednesday appeared to rebuff those warnings, setting the stage for Iran to resume production of more highly enriched uranium.

The Iranians have said they are trying to preserve the nuclear deal, but they have expressed increasing impatience with the Europeans’ requests that Tehran abide by the 2015 agreement — known as the Joint Comprehensive Plan of Action, or J.C.P.O.A., — long after the Trump administration stamped it a dead letter.

“Iran is committed to the full implementation of the #JCPOA: as long as E3/EU implement THEIR economic commitments,” Iran’s foreign minister, Mohammed Javad Zarif, wrote on Twitter late Tuesday night, referring to the European Union and its three signatories to the deal, Britain, France and Germany.

“So moving forward, Iran will comply with its commitments under the JCPOA in exactly the same manner as the EU/E3 have — and will — comply with theirs,” Mr. Zarif added. “Fair enough? “