Red Sox 4, Yankees 1: Yankees Cause an Uproar Against the Red Sox, but Their Bats Are Quiet 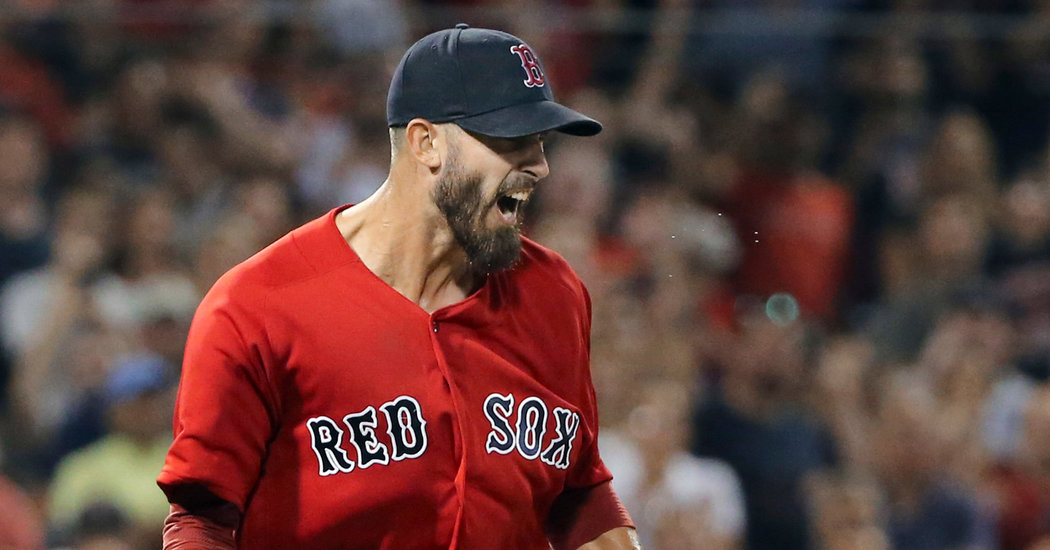 BOSTON — Luis Severino delivered a message with his first pitch on Friday night — a fastball under Mookie Betts’s chin, which sent Betts sprawling into the dirt, the Fenway Park crowd into a frenzy and Red Sox Manager Alex Cora into a tizzy.

What Severino could not deliver was the type of stop-the-bleeding performance that the Yankees so desperately needed from their ace, as they lost again to the Boston Red Sox, 4-1.

One night after the Yankees’ pitchers were pummeled, their bats were muzzled by the right-hander Rick Porcello, who continued his dominance against them at Fenway Park by pitching a complete-game one-hitter. He allowed only a third-inning solo homer to Miguel Andujar.

The loss dropped the Yankees seven and a half games behind the Red Sox in the American League East race, and the forecast for Saturday afternoon is no more encouraging. The Yankees will hand the ball to Chance Adams, a 23-year-old right-hander, for his major league debut.

It should not take long for Adams to notice that he is not pitching in Pawtucket.

This rivalry transitioned into a new era last season with the emergence of young stars on both teams, and it regained its edge in April when Red Sox reliever Joe Kelly hit Tyler Austin and precipitated a bench-clearing scrum.

Manager Aaron Boone had maintained confidence that Severino, who has been far from his All-Star form the last month, was close to regaining his touch. But after Porcello began the game by hitting Brett Gardner with an 0-2 pitch — a circumstance that hardly seemed intentional — Severino dusted off Betts with a 95 mile-per-hour fastball.

Whether he was responding to Gardner’s being hit — or to a brushback of Giancarlo Stanton in Thursday’s rout — or he simply wanted to make the Red Sox batters uncomfortable, Severino has not shied away from protecting his teammates. Two years ago, he was ejected after hitting Toronto’s Justin Smoak, which happened after J.A. Happ retaliated for Severino’s hitting Josh Donaldson.

Severino said the pitch that floored Betts merely got away.

Perhaps, but the objective may have been just to make the Red Sox squirm — especially Betts, who entered the night batting .462 against the Yankees this season and reached base six times on Thursday night.

“When somebody puts up 15, 16 runs, you’ve got to change up the game plan,” Austin Romine said. “When you’ve got a guy that throws 100 miles per hour, you’ve got to pitch them in to keep them honest.”

As Betts brushed himself off and the Fenway crowd howled, the home plate umpire, Adam Hamari, pointed to both dugouts, warning that another purpose pitch would lead to ejections of the pitcher and his manager.

That brought Cora, the Red Sox’ manager, charging out of the dugout toward home plate. As he neared, Hamari held up his hand for Cora to stop, then almost immediately ejected him. Cora was unbowed, jabbing the space in front of Hamari with his index finger and yelling at him. The rookie manager at least got his money’s worth.

When play resumed, Severino retired Betts on a ground ball, but Andrew Benintendi followed by looping a ground-rule double down the right-field line.

Steve Pearce, whose three home runs on Thursday night earned him a spot in the Friday lineup against the right-handed Severino, crushed a 1-0 fastball over the Green Monster. The Red Sox extended the lead to 3-0 when Ian Kinsler walked with two outs, stole second and scored on Eduardo Nunez’s bloop single to center.

“It definitely got emotional, but I think more than anything, it probably got us fired up,” said Porcello, who owns a 1.25 earned run average in eight career starts here against the Yankees. “Might have gotten us locked in, I’m not really sure. We definitely didn’t take it lightly, didn’t like it.”

The way Porcello pitched, the early runs were plenty.

Porcello, who carried a no-hitter into the seventh inning in April against the Yankees, allowed no one to reach base but Andujar and Gardner, who was erased on a double-play ball by Stanton. Porcello (14-4) struck out nine, walked none and was in such complete command that he needed only 86 pitches to complete the game.

That left the Yankees straining to find positives, such as hitting into several hard outs and the fact that Severino (14-5), after the rocky start, managed to make his way into the sixth inning for the first time in a month, even if he needed a season-high 115 pitches to do it.

When Boone arrived at the mound to relieve him with two outs in the sixth, he stopped Severino and delivered a few emphatic words, which he punctuated by pounding his pitcher on the chest.

Boone wanted Severino to appreciate a small victory, the only ones the Yankees are able to cling to at the moment.

A version of this article appears in print on , on Page D3 of the New York edition with the headline: In a Game That Started With a Bang, the Yankees Barely Whimper. Order Reprints | Today’s Paper | Subscribe