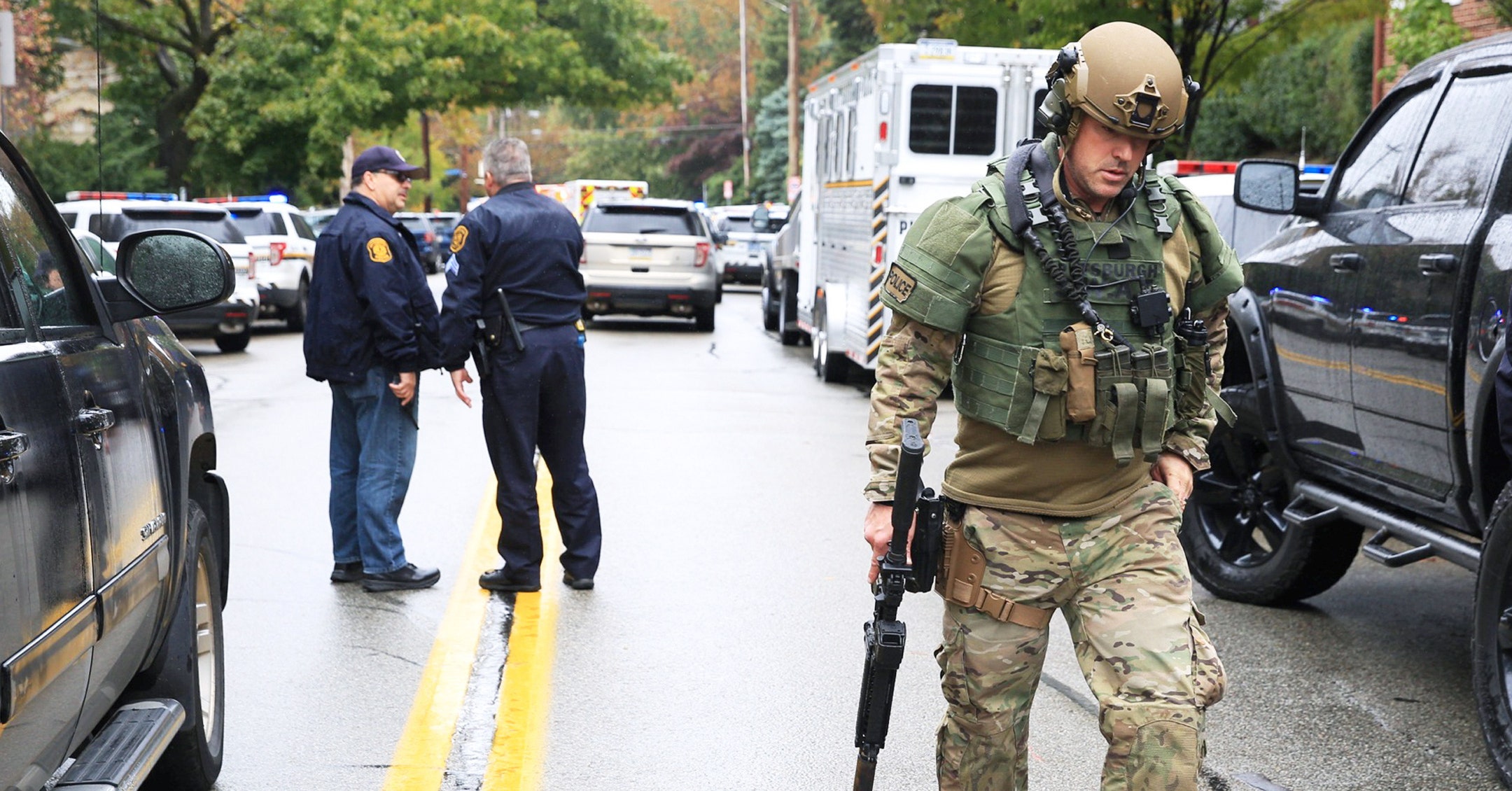 11 people were killed and six others—including four police officers—injured Saturday when a gunman opened fire during a baby-naming ceremony at the Tree of Life Congregation, a Synagogue in Pittsburgh. The shooter, Robert Bowers, 46, surrendered to the police and was taken to the hospital, a local councilwoman told the The New York Times. Bowers—who has been linked to an account on the social media site Gab that shared anti-Semitic messages—is expected to face hate crime charges. The Anti-Defamation league called the shooting “likely the deadliest attack on the Jewish community in the history of the United States.”

Gab, a relatively small social network that claims to “defend individual liberty and free expression online” has fewer restrictions on what users can post than platforms like Twitter and Facebook. Its relative lawlessness has made it a gathering spot for white supremacists and other members of the extreme alt-right. The network released a statement following Saturday’s shooting identifying an account believed to have belonged to Bowers, the Synagogue shooter. “The account was verified and matched the name of the alleged shooter’s name, which was mentioned on police scanners,” the statement reads. “This person also had accounts on other social networks.” Gab says it took down Bowers account and contacted the FBI, according to the post. Paypal banned Gab from its payment platform after Saturday’s shooting.

This is the second attack this week in which the perpetrator has been linked to social media accounts that shared online conspiracy theories. Cesar Sayoc, 56, who was arrested earlier this week in connection with 13 explosive devices sent to prominent Democrats and CNN, is believed to have used sites like Twitter to share ultra-right-wing conspiracy theories about many of the people he targeted. That includes George Soros,
a prominent Jewish philanthropist who is often the target of right-wing conspiracy theories, which have been repeatedly echoed by President Trump. The first device discovered Monday was located at Soros’ home.

It may never be entirely clear why Sayoc and Bowers chose to carry out violent attacks. But their social media activity is part of a broader increase in anti-Semitism online. Jonathan Albright, a researcher at Columbia’s Tow Center For Digital Journalism, has recently found a high volume of anti-Semitic content on Instagram, under hashtags like “#soros”. In advance of the midterm elections, far-right extremists have used anti-Semitism as a talking point on social media, according to a report released Friday from the Anti-Defamation league, a Jewish civil-rights group that tracks bigotry and hate crimes. The ADL’s researchers interviewed five Jewish Americans who are involved in politics and analyzed more than 7.5 million Tweets, sent between August 31 to September 17 of this year. In that time, they found that amount of anti-Semitic language had increased. “The online public sphere—now a primary arena for communication about American politics—has become progressively inhospitable for Jewish Americans,” the researchers wrote. They also concluded that the majority of anti-Semitic messages posted to Twitter came from real individuals, not bots.

Anti-Jewish sentiment is also on the rise in seedier online locales, including Gab and the message board 4Chan, both of which are already known to house hate speech and far-right conspiracy theories. The use of term “jew” and a slur for Jewish people dramatically increased on Gab and 4chan’s politically incorrect message board following political events like the 2016 presidential election, President Trump’s inauguration, and the 2017 white supremacist rally in Charlottesville, Virginia, according to a study conducted by the non-profit Network Contagion Research Institute that has yet to be peer-reviewed.

Anti-Semitism is also on the rise in the real world too. Instances of anti-Semitic harassment, vandalism, and assault increased 57 percent from 2016 to 2017, according to an Anti-Defamation League report released earlier this year. It’s the largest single-year jump the ADL has recorded since it began collecting data in the 1970s. In its most recently released survey, the FBI found that was an almost 5 percent rise in hate crimes in 2016—and, that of the roughly 20 percent of hate crimes that were religiously motivated, more than half were targeted against Jews. From 2014 to 2015, the FBI recorded a 10 percent rise in hate crimes.

It’s impossible, at this point, to directly correlate Sayoc and Bowers’ online postings to their subsequent violent attacks—but taken in tandem, the combination is troubling. Digital communities provide a fertile breeding ground for hate speech to fester and organize. It wouldn’t be the first time these online ecosystems spilled that hate into real world violence.