On Pro Basketball: The Warriors Prepare to Add Another Star: DeMarcus Cousins 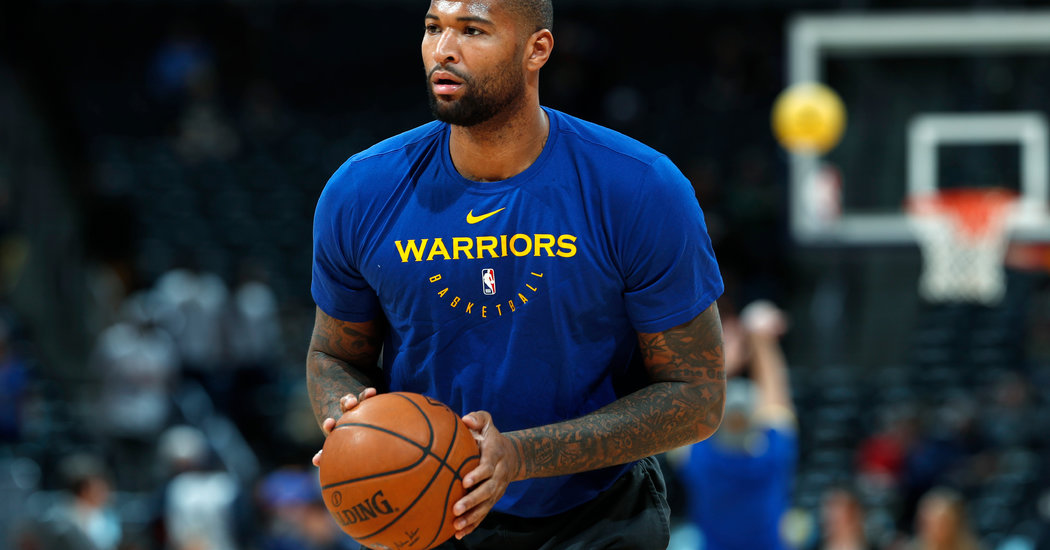 DENVER — Moments after the Golden State Warriors finished obliterating the Denver Nuggets on Tuesday night, Draymond Green was asked about a teammate who did not even play — a teammate, in fact, who has yet to log a single minute this season but is nearing his much-anticipated debut.

“Hopefully,” Green said, “it’s devastating for everybody else.”

Let that soak in for a second. The Warriors, who have won three of the last four N.B.A. championships, are already good at basketball. All they did on Tuesday was set an N.B.A. record by scoring 51 points in the first quarter — the first quarter! — against a team that came into the game with the best record in the Western Conference.

But now, after signing DeMarcus Cousins over the summer and spending recent months incorporating him into their dynastic fold as he recovered from Achilles’ tendon surgery, the Warriors expect him to be in their starting lineup when they visit the Los Angeles Clippers on Friday night. It is a grand experiment that will play out over the second half of the season.

“More than anything, we’re just excited for DeMarcus,” Coach Steve Kerr said late Tuesday night, adding: “It’s going to take him some time to get his rhythm.”

Cousins, a 28-year-old center and a four-time All-Star, has not played since Jan. 26, 2018, when he tore his left Achilles’ in a game for the New Orleans Pelicans. At the time, Cousins was having a career season, with averages of 25.2 points, 12.9 rebounds and 5.4 assists a game. He was also due for free agency and an enormous payday.

But his type of injury has ended careers, particularly among big men, and every team in the league balked at offering him a long-term deal. He wound up with the Warriors, who signed him to a one-year contract worth $5.3 million — a modest price for a reclamation project with upside and little obvious risk.

“It’s a relief,” Cousins told reporters last week. “It’s been a long year for me, a lot of ups and downs, but the finish line is ahead.”

There is no way of knowing if Cousins, who is listed at 6-feet-11 and 270 pounds, will ever be the top-tier player he once was. But the Warriors neither need nor expect him to be a focal point of their offense, and if he merely commands attention from defenders, especially in the post, he should free up additional space on the perimeter for the team’s cavalcade of shooters.

“We haven’t had a player like him before, so it will be new,” Kerr said. “It won’t be a simple ‘plug him in and he’ll fit right in.’ We’ll play through him some, so there will be a period where we have to adapt. Fortunately, we’re halfway through the year. We have a lot of games to figure this out.”

Since the Warriors began collecting championships under Kerr in 2015, they have had a rotating cast of dependable but unspectacular centers: Andrew Bogut, Festus Ezeli, Zaza Pachulia, JaVale McGee. Cousins has never been a role player, though he acknowledged his new (and unfamiliar) place in the Warriors’ ecosystem.

He also has a reputation for being emotional, and something of an antagonist. Some of the Warriors have firsthand experience. Kerr recalled getting ejected after arguing with the officials in a game against the Sacramento Kings in 2017, back when Cousins was playing for them. But before he left the court, Kerr caught Cousins taunting him by waving goodbye.

Then there was an episode last season, when Cousins was playing for the Pelicans, and he got into an altercation with Kevin Durant. After both players were ejected, Cousins tried to track down Durant outside the Warriors’ locker room — and not to exchange pleasantries.

“It shows that you care,” Cousins said of playing with passion. “It shows that it means something to you. I’m not really fans of the guys who are emotionless on the floor.”

“I loved coaching him,” Malone said. “I think he’s a player that’s misunderstood, and when you have a chance to know him, you realize who he is as a player and as a person. And when he’s healthy, he’s one of the more unstoppable big men in the N.B.A.”

Malone said he expected that Cousins would give the Warriors “a big lift,” and Malone made those remarks before the Nuggets’ 142-111 loss to the Warriors.

The Warriors have had their struggles this season, although these things tend to be relative. Green beefed with Durant. Stephen Curry missed 11 games with a strained groin. Klay Thompson labored through an early-season shooting slump that he refused to acknowledge as an early-season shooting slump. And they have lost more games than they usually do.

The Warriors have been rolling of late, though, winning seven of their last eight before their game against the Pelicans on Wednesday night. They appear to be playing their best basketball of the season, as evidenced by their demolition of the Nuggets, a rout so thorough that Malone said it would be impossible for his team to just “flush” the loss and forget it.

But now, as the Warriors get ready to introduce Cousins to their explosive mix, there are questions: Can he play with pace? Can he acclimate himself to a supporting role? Can he defend quicker players if opponents go small against him? And most important, can he stay healthy and find his old form ahead of the playoffs?

The Warriors are eager to find out.