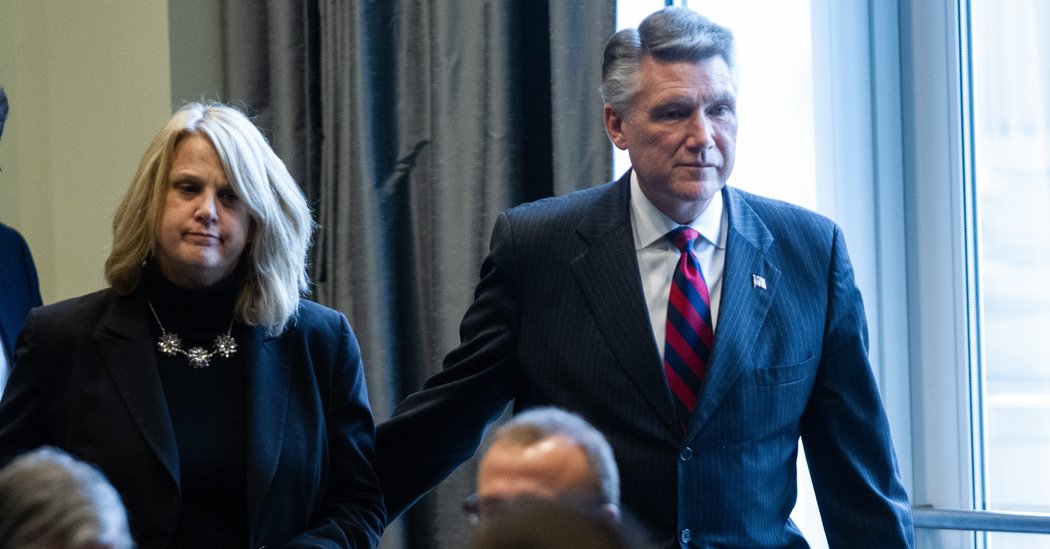 RALEIGH, N.C. — North Carolina officials on Thursday ordered a new contest in the Ninth Congressional District after the Republican candidate, confronted by evidence that his campaign had financed an illegal voter-turnout effort, called for a new election.

The unanimous ruling by the five-member Board of Elections was a startling — and, for Republicans, embarrassing — conclusion to a case that has convulsed North Carolina since November.

And it followed testimony that outlined how a political operative had orchestrated an absentee ballot scheme to try to sway the race in favor of Mark Harris, the Republican candidate. It is now the single undecided House contest in last year’s midterms.

Robert Cordle, the state board’s chairman, cited “the corruption, the absolute mess with the absentee ballots” when he called for a new election. “It was certainly a tainted election,” he said.

Mr. Harris had a 905-vote lead over his Democratic opponent, Dan McCready, but his success in Bladen County — where he won 61 percent of absentee ballots even though Republicans there accounted for just 19 percent of them — alarmed regulators.

When he finally took the stand Thursday morning, Mr. Harris denied knowing of any wrongdoing in the voter-turnout effort led by L. McCrae Dowless Jr., a veteran political operative known as a local “guru of elections.”

But in a series of questions, Mr. Harris stumbled and appeared to mislead the board. When he returned to the crowded courtroom after a lunch recess, he asked whether he could read a statement. He apologized to the board and explained that recent medical issues, including two strokes, had impaired his abilities and recall.

And then he asked for a new election.

“It’s become clear to me that the public’s confidence in the Ninth District’s general election has been undermined to an extent that a new election is warranted,” Mr. Harris said to audible gasps.

Mr. Harris’s surprise announcement represented an abrupt collapse of the Republican effort to stave off a new vote in the Ninth, which includes part of Charlotte and runs through much of southeastern North Carolina.

His political surrender came after a damaging 24 hours for him and his supporters. He acknowledged that some of his testimony on Thursday morning had been “incorrect.” Hours earlier, state officials had accused the Harris campaign of withholding incriminating records that were subpoenaed months ago.

The board’s decision will leave the Ninth District without representation in Congress for at least several months. It was not clear whether Mr. Harris would run in the new election, which has not been scheduled.

Robin Hayes, the chairman of the North Carolina Republican Party, said the party supported Mr. Harris’s decision “on behalf of the voters.”

The Ninth District controversy ranks among the highest-profile examples of modern election fraud, and also underscores how absentee ballots remain susceptible to abuse.

Witnesses this week have described an enterprise that was rife with misconduct, including the collection and completion of absentee ballots. Witnesses said that both actions, which are illegal in North Carolina, had occurred repeatedly.

If Mr. Harris does run, he will almost certainly be seen from the start as a hobbled candidate. Even before allegations of fraud swamped his bid, Mr. Harris was far from a universally beloved figure in his party. A campaign for Senate in 2014 faltered. So, too, did a run for the Ninth District’s House seat in 2016.

By Mr. Harris’s own account on the stand Thursday, it was his narrow defeat in the 2016 race that set a course toward the board’s decision. By March 2017, according to a text message turned over to investigators only on Wednesday, Mr. Harris was communicating with a political ally in Bladen County, a rural part of the district, about “the guy whose absentee ballot project for Johnson could have put me in the US House this term, had I known, and he had been helping us.”

“Johnson” was Todd Johnson, one of Mr. Harris’s rivals in the 2016 race, and “the guy” was Mr. Dowless, a Bladen County operative with a felony record and a reputation for shadowy work for Democratic and Republican politicians. Mr. Dowless and Mr. Harris met in a furniture showroom about a month later.

“How did you beat us so bad?” Mr. Harris said he had asked Mr. Dowless about the 2016 race. Mr. Dowless then explained a two-phase effort that concentrated on absentee ballots.

In the first phase, Mr. Harris testified, Mr. Dowless and his associates would help voters submit requests for absentee ballots — an ordinary and legal political activity in North Carolina. In the second, workers would ensure that voters had received the ballots and would inquire whether they needed assistance.

But under no circumstances, Mr. Harris was assured, were the workers to collect the ballots.

Two weeks after the meeting, Mr. Harris pulled out his personal checkbook and paid a $450 retainer. The next month, before Mr. Harris entered the congressional race, he paid Mr. Dowless another $2,890.

Mr. Dowless and his associates, who were often his acquaintances or relatives with little interest in politics but hoping for fast cash, went to work. Mr. Dowless, who refused to testify before the board, has not been charged with any crimes in connection with the 2018 election, nor have any of his workers. Prosecutors are examining the operation, though, and are considering whether to bring any criminal charges.

Within weeks of the election, state officials opened an investigation and declined to certify Mr. Harris as the winner, setting up this week’s extraordinary proceedings.

For Mr. Harris’s campaign, the hearing was disastrous from its opening moments, when Kim Strach, the executive director of the state board, said investigators had found “a coordinated, unlawful and substantially resourced absentee ballot scheme” that appeared to have cost tens of thousands of dollars.

Two witnesses described an array of misdeeds that they committed at Mr. Dowless’s behest — accounts that observers believed that, on their own, might have been enough to warrant a new election. But the state’s investigators had a surprise witness: one of Mr. Harris’s sons, John Harris, a 29-year-old Justice Department lawyer who, as a high school student, had been elected president of the honor council.

In testimony before a riveted courtroom on Wednesday, the younger Mr. Harris said he had been wary of Mr. Dowless after analyzing returns in the 2016 election. In an email the day after Mr. Harris and Mr. Dowless met, John Harris explained the stakes.

“The key thing that I am fairly certain they do that is illegal is that they collected the completed absentee ballots and mail them all at once,” John Harris wrote in an email that he shared with investigators — a document his father’s campaign had not done weeks ago, when it said it had complied with a subpoena’s demands.

Even though John Harris explicitly noted that he did not believe his father had known of any specific misconduct last year, the email and the testimony crippled the Harris campaign’s assertion that there had been no grounds to be suspicious of Mr. Dowless or his methods.

“I love my dad, and I love my mom,” John Harris said in his closing remarks, as his father wept. “I certainly have no vendetta against them, no family scores to settle. I think they made mistakes in this process, and they certainly did things differently than I would have done them.”

Out of public view, Mark Harris’s perils were mounting. Just before his son climbed the witness stand, the campaign’s counsel acknowledged that they had more undisclosed documents to share with investigators. That revelation, which a lawyer for Mr. Harris attributed to differing interpretations over a subpoena’s scope, stunned state officials.

Board members, who had seemed mostly impassive through days of testimony, were outraged.

Then, with Mr. Harris testifying just before lunch on Thursday, Josh Lawson, a lawyer for the state board, posed a series of questions that suddenly sped up what had been a slow-motion political unraveling: Before Wednesday afternoon, had Mr. Harris told anyone that the email his son disclosed was not part of the evidence in the case?

Mr. Harris did not recall any such conversations. His lawyer soon asked for a recess.

When the hearing resumed, Mr. Harris asked to read a statement. On Tuesday night, he acknowledged, he had spoken to his other son “about the fact that I did not think John’s emails would be part of this hearing.”