N.F.L. Players Push Back Against Jerry Jones on Anthem Issue 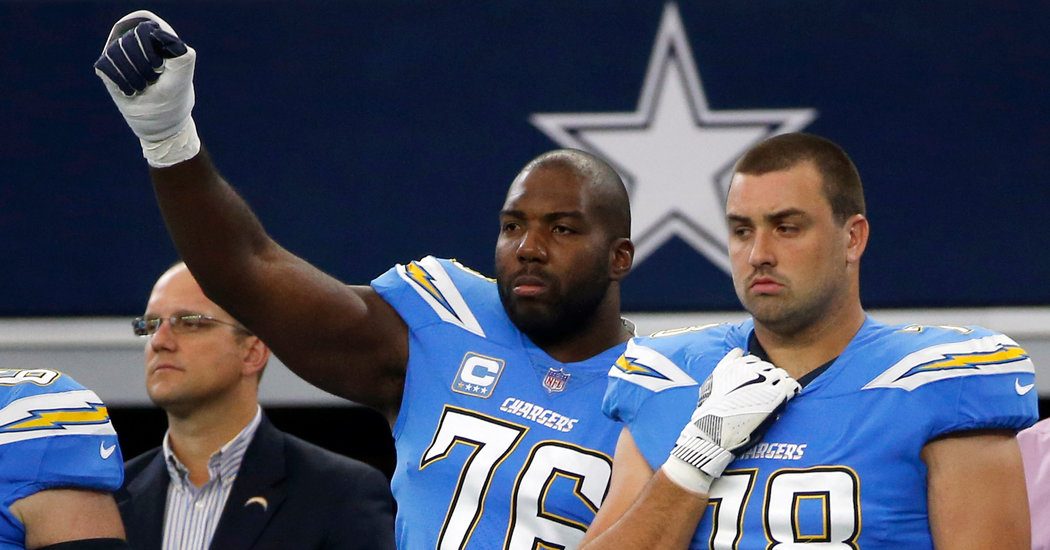 With less than a week until the N.F.L. preseason begins, the league’s policy on what players must do during the playing of “The Star-Spangled Banner” is in more flux than ever as players sounded off Friday against the Dallas Cowboys owner Jerry Jones’s demand that his players stand for the anthem.

Jones’s pronouncement this week followed the league’s announcement that it was delaying a revised policy. That plan would obligate players on the field to stand at attention but provide them the option of remaining in the locker room. The league is trying to negotiate another revision to the policy with the N.F.L. Players Association.

Jones said that all his players must stand on the field, and cannot remain in the locker room, which threw a wrench into the already fraught talks.

Jones’s son Stephen went further on Thursday, suggesting that the Cowboys would cut any player who disobeyed the team’s policy.

President Trump, who has repeatedly attacked the league and owners for not dismissing players who protest during the anthem, congratulated Jones for taking a hard line. “Way to go Jerry,” Trump wrote on Twitter on Friday morning. “This is what the league should do!”

In contrast to the Joneses, the Atlanta Falcons’ owner, Arthur Blank, took a more conciliatory tone.

While saying that his team has asked the players to stand for the anthem, Blank added that players “do have First Amendment rights.”

“It’s far better in my opinion to have somebody make those decisions themselves than to hit them over the head with a hammer,” he told reporters at the opening of the team’s training camp Friday.

The players, who are loath to give up what many see as their right to speak freely in a public square, say they are not protesting the national anthem but trying to raise awareness about police brutality toward African-Americans and other forms of social injustice.

“I think it’s unfortunate that you have owners like him that use his position to intimidate and intentionally thwart even the idea of his players thinking individually or having a voice about issues that affect their communities daily, which is unfortunate,” Jenkins told reporters.

With the discord rising, N.F.L. executives, owners and the union met on Friday in hopes of finding yet another solution. Jones’s stance, though, has led one of the participants in those talks, Russell Okung, an offensive lineman with the Los Angeles Chargers and a member of the N.F.L. Players Association executive committee, to question whether the league is negotiating in good faith.

In a series of tweets published late Thursday, and in an email exchange on Friday, Okung asked whether negotiations could be meaningful if owners like Jones set their own policies that contradicted the league’s stance. He wondered also whether the N.F.L. was negotiating for public relations purposes.

“If the line in the sand has been drawn, are we really meeting in good faith or for the league’s need for a faith performative sound bite?” he wrote.

In an email on Friday, Okung clarified his views.

Okung said the league should stop trying to please President Trump. While he considers Jones an outlier “when it comes to his behavior and his antics and desire to appease Trump,” ultimately, “most owners quietly agree with his position,” he wrote.

He said that most players agree with Kenny Stills, a wide receiver on the Miami Dolphins, who said the league didn’t need an anthem policy and that players should be able to do what they wanted. Though meetings with so many busy people are difficult to arrange, Friday’s talks were complicated because so many players, including Okung, were back in training camp.

Still, Okung said he was hopeful that something positive would come from the meeting. What that might be, he did not say.

The players’ union has told the N.F.L. that it will fight what it sees as limits on the right to free speech at every turn and will not begin talks on a new collective bargaining agreement if the league tries unilaterally to enforce a policy the players have not approved.

The league and the union released a joint statement on Friday:

“A short time ago, the NFL and NFLPA concluded a constructive meeting regarding the anthem policy and the very serious social justice issues that have been the basis of some players’ protests. We are encouraged by the discussions and plan to continue our conversations.”

A version of this article appears in print on , on Page B8 of the New York edition with the headline: Jones Draws Pushback From Players On Anthem. Order Reprints | Today’s Paper | Subscribe