LeBron James Can Play in Whatever Shoes He Wants. Why Can’t Odell Beckham Jr.? 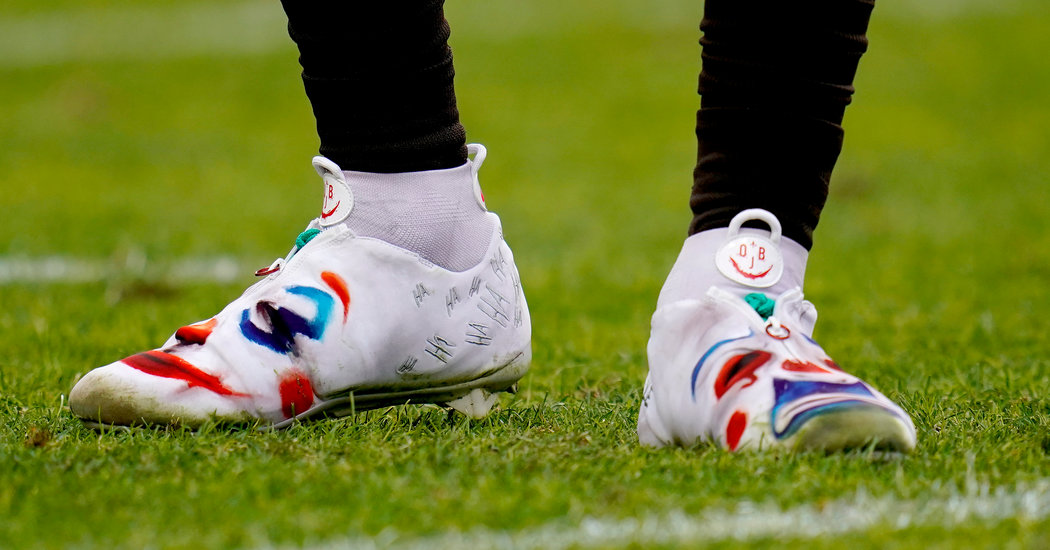 The N.F.L. changed its rules in 2017 to give players more ways to express themselves through what they wear. Within reason.

Players could wear customized cleats. In any colors they wanted!

That is, as long as the designs were not political or offensive in any way. And as long as the shoe brand in question was sanctioned by the league. Oh, and they could only wear those cleats … during warm-ups. Once the game started, it was back to the same colors that their teammates were wearing.

On Sunday against the Denver Broncos, Odell Beckham Jr. and Jarvis Landry of the Cleveland Browns were compelled to change their cleats at halftime; they had worn their special designs during the game in violation of the league’s dress code. It was yet another sign that, even as N.B.A. players have set a new standard for showing off their individuality on the court, the N.F.L. and other men’s professional leagues maintain their embrace of uniformity.

During the game against the Broncos, Beckham and Landry were told that they would be barred from playing in the second half if they did not change their cleats. They did so. (Beckham, the splashy former receiver for the Giants and one of the N. F. L’s best known players, had a picture of the Joker on his laces. Landry’s were gold and orange.)

The N.F.L.’s rule book specifies that players must wear shoes that are “black, white or any constitutional team color” or any combination thereof.

In a phone interview, Brian McCarthy, an N.F.L. spokesman, explained the thinking behind the policy.

“The N.F.L. represents the highest level of sports,” he said. “N.F.L. players are required to reflect that high level of professionalism in everything they do on game day. And that applies to the uniform itself.”

He added: “That goes from literally head to toe.”

The dress code is enforced by two representatives, one stationed on either sideline during games. Those representatives are often former players, McCarthy said.

Current players, and those who work with them closely, have expressed confusion about the rule. Beckham said that he planned his shoes before the season to match each week’s uniforms.

“They literally switched the jersey,” Beckham told ESPN. “The cleats that I had was not for that jersey. We were supposed to wear white. The cleats were white.”

N.F.L. teams tend to announce which uniforms they will be wearing each week before the start of the season, though some opt to announce the week of their games. A schedule published on the Browns’ website in September shows that they were slated to wear their primary colors — brown and orange — in Denver.

Football players have embraced customized cleats, which tend to be as colorful and pop culture savvy as the shoes of their counterparts on the basketball court. Luca Sturm, 16, has for the past several seasons run an Instagram account, @coolestcleats, that showcases the best of football footwear. Last month, he passed the 50,000 follower mark. He thinks Beckham has the best cleats in the league.

“I do wish they were on during the game because they’re very cool,” Sturm said in a phone interview.

Daniel Gamache, 40, regularly designs cleats for Minnesota Vikings receiver Stefon Diggs and Giants receiver Golden Tate. His designs start at about $500. A recent pair he designed for Diggs were bright orange and doubled as an advertisement for Popeyes’ chicken sandwich. (Gamache said that he did not know how much the receiver had been paid to wear the shoes.)

Gamache said it was “hard for us to judge what’s going to be passable and what’s not” under the N.F.L.’s policy.

“Even if you try to put the team colors on the shoe, it still runs the risk of a fine,” he said. “It’s definitely tough, especially when you do see the N.B.A. and all restrictions are off.”

Last season, the N.B.A. changed its rules to allow sneakers of any color, barring only third-party logos, which have to be approved by the league ahead of time. The change coincided with a new uniform sponsorship deal with Nike, which sponsors many of the league’s top players, including LeBron James of the Los Angeles Lakers, and the Nets’ Kyrie Irving and Kevin Durant. N.B.A. players have taken advantage. On opening night of this season, Minnie Mouse, aliens from the movie “Space Jam” and SpongeBob SquarePants frolicked on court by way of players’ shoes.

The change in policy gave N.B.A. players an opportunity to express their personalities, said Colleen Garrity, the vice president of basketball marketing at Excel Sports Management, which represents Blake Griffin, Brandon Ingram and Kemba Walker, among others.

“You can learn a little bit more about a guy when you see what he’s putting on his shoe, whether it’s a social campaign or his love for a movie or character or something like that,” she said.

Gestures like these allow players to build fan bases and to make money. Gamache argued that the same opportunities were not available to N.FL. players.

“It’s a challenge for them to benefit themselves,” he said. “And also on top of that they’re wearing helmets. You’re not seeing their faces.”

Others said that, given the rise of social media and fantasy football, N.F.L. players had no shortage of opportunities to promote their names and faces.

“Ten years ago, it didn’t help that when people watched them for three hours, they had a helmet on their head,” said David Schwab, the executive vice president at Octagon, a sports marketing firm. “Now, Odell’s got 13 million Instagram fans. If you scroll through his posts there are not going to be many with his helmet. His awareness of his name and face are way stronger than they were 10 years ago.”

Schwab said that N.B.A. players benefit more from playing a global sport, with the most recognizable stars like Golden State’s Stephen Curry and James able to market their signature shoes to fans all over the world.

McCarthy, the N.F.L. spokesman, pointed toward the league’s “My Cause My Cleats” campaign, scheduled for Week 14 this season, in which players can wear cleats customized with art that expresses “their commitment to the causes that are most important to them.” It was first introduced in Week 13 of the 2016 season. Two weeks later, Beckham wore customized cleats that honored Craig Sager, the N.B.A. broadcaster who had died of cancer days earlier; he was fined $18,000.

Beckham has run afoul of the league’s dress code multiple times this season, most notably when he sported a $190,000 wristwatch during a September game. He suggested on Sunday that the league is singling him out.

“I’ve seen people in cleats that are completely different colored from their team and they can wear them all game on a prime-time game and for some reason when it comes to me, it’s not the case,” he said.

Asked to respond to Beckham, McCarthy said “The policies are uniform and apply to all N.F.L. players equally.”