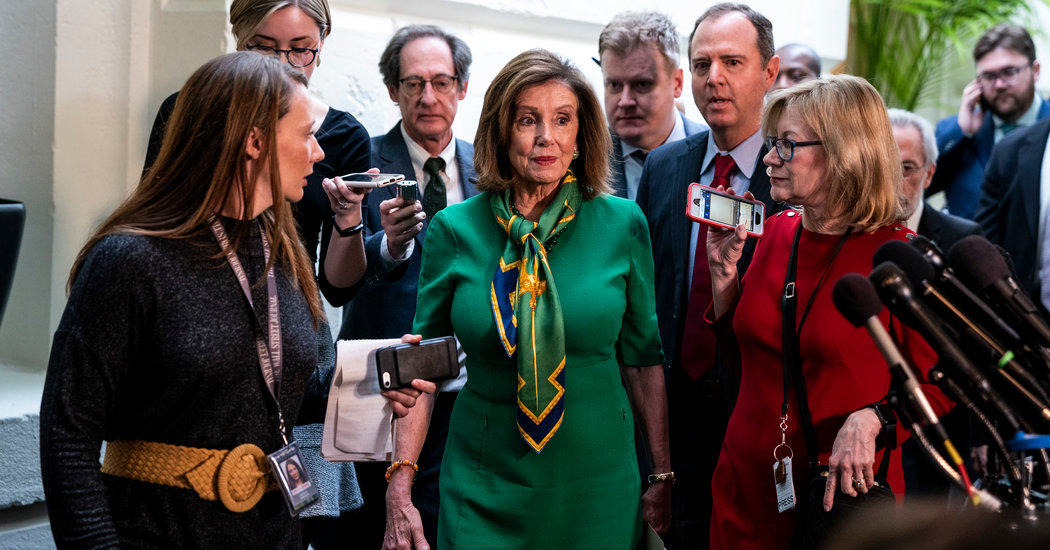 WASHINGTON — The House will vote on Wednesday to send its impeachment charges against President Trump to the Senate, allowing a long-awaited trial to begin in the coming days, Speaker Nancy Pelosi announced on Tuesday.

The proceeding will be only the third time an American president has been put on trial in the Senate. It is poised to begin almost a month to the day after the House voted to impeach Mr. Trump for abuse of power and obstruction of Congress for his efforts to pressure Ukraine to investigate his political opponents, and his stonewalling of Democrats’ inquiry into his actions.

“The American people deserve the truth, and the Constitution demands a trial,” Ms. Pelosi said in a statement. “The House will now proceed with a vote on transmitting the articles of impeachment and naming impeachment managers on Wednesday, January 15.”

The announcement came not long after Ms. Pelosi detailed her plan to Democratic lawmakers in a closed-door gathering on Tuesday morning. Before the vote, she said, she would appoint the team of lawmakers who will serve as prosecutors, or managers, in the case against Mr. Trump. She did not say whom she would choose.

Democratic leaders in the House were working behind the scenes with Republican leaders in the Senate and Chief Justice John G. Roberts Jr., who will preside over the trial, to determine key questions of timing for the highly choreographed ritual of turning over the charges to the Senate.

Still uncertain is precisely when the House managers will ceremonially walk the articles of impeachment from the House chamber to the Senate. They will then formally present the articles and read them aloud in their entirety, prompting a trial to commence.

Representative Steny H. Hoyer of Maryland, the No. 2 House Democrat, told reporters that the House vote would take place in the afternoon on Wednesday, but the dramatic procession across the Capitol could be postponed until Thursday to not interfere with a ceremony previously scheduled for Wednesday in the Capitol Rotunda.

At some point thereafter, either on Wednesday or Thursday, the chief justice will leave the Supreme Court and travel across the street to the Senate chamber to administer an oath to senators to do “impartial justice.”

Senate Republican leaders have indicated that the trial is unlikely to begin in earnest until next week, to allow both the prosecution and the defense time to prepare their arguments. But first, the Senate is likely to wage a partisan fight over the structure of the trial, a fight in which Republicans and Democrats will clash over whether to call crucial White House witnesses and allow new documents into evidence. Mr. Trump blocked the House from gaining access to both during its impeachment inquiry.

Speaking on the Senate floor, Senator Mitch McConnell, Republican of Kentucky and the majority leader, chastised the House for what he called a “half-baked” case and said it was not the job of the senators to fill out the factual record. He argued aggressively against the Senate calling new witnesses and evidence, as Democrats have demanded is necessary for a fair trial.

“I hate to talk about hypotheticals, but let’s be clear: The president is not afraid of a fight,” Mr. Gidley said. “And if you or anyone within the sound of our voices have been falsely accused of a crime, with no proof, and no evidence, for more than three years, you’d want every witness to come forward too, and say this man did nothing wrong.”

Behind the scenes, though, Mr. Trump’s team were bracing for a potentially damaging period, inviting conservative activists to the White House to plot strategy for the coming impeachment fight.

Ms. Pelosi blasted both Mr. McConnell and Mr. Trump in her statement, accusing them of working together to cover up the facts the House had unearthed.

“The American people will fully understand the Senate’s move to begin the trial without witnesses and documents as a pure political cover-up,” she said. “Leader McConnell and the president are afraid of more facts coming to light.”

The team of managers is likely to be led by Representative Adam B. Schiff of California, the chairman of the Intelligence Committee who helmed the House’s Ukraine inquiry, but the speaker was keeping her selections extremely close.

During the meeting on Tuesday, Mr. Schiff laid out his expectations for trial procedures, telling members that House managers would likely have 24 hours to present their case against Mr. Trump, spread over four six-hour days. The president’s lawyers would be given the same amount of time.

Mr. Schiff’s presentation appeared to be based on the procedures from President Bill Clinton’s impeachment trial in 1999. Mr. McConnell has said he plans to adopt similar procedures this time, but he has yet to release a detailed proposal, leaving the House in the dark about what is to come.

“None of us have been through it before,” said Representative Peter Welch, Democrat of Vermont.