He Was Fearless on a Football Field. But He Sensed Something Wasn’t Right. 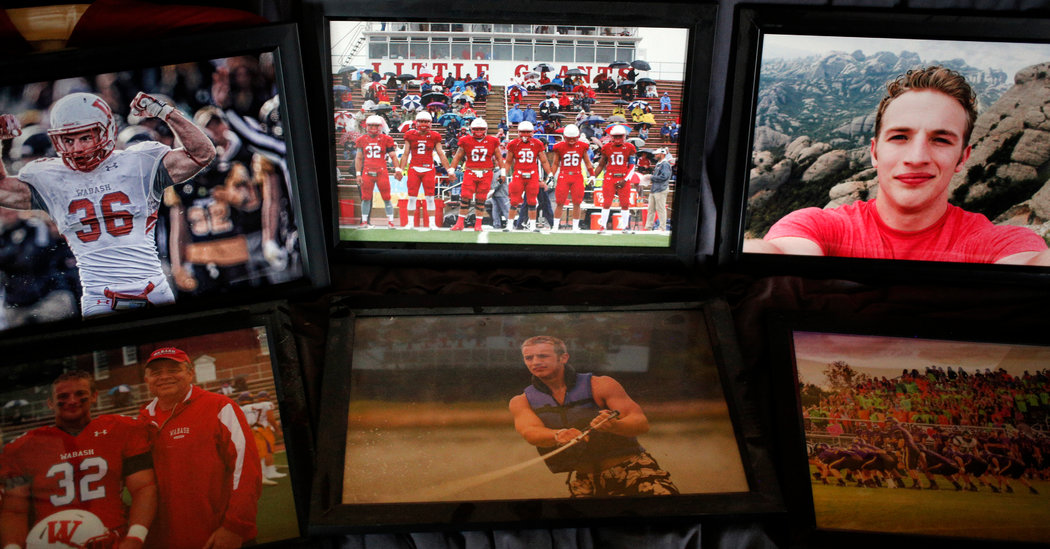 CARMEL, Ind. — He was swift and fierce and saw the football field with the eyes of a bird of prey. If the opposing offense ran a pitch out, Evan Hansen would pull the runner to earth in the backfield. If the quarterback grew desperate and fell back to pass, well, God help him. Evan — quick, spinning, a dervish of a linebacker — would drill him.

He was a gregarious teammate, as at ease comforting a nervous freshman as he was talking with coaches and parents, which explained why he was voted team captain on a nationally ranked N.C.A.A. Division III team. A 21-year-old senior at Wabash College, he had a ticket to France to see his girlfriend at Christmas break, his future pregnant with possibility.

And just after senior day in September 2018, Evan Hansen walked into the woods and shot himself.

Many months later, the scientists at Boston University who examined his brain after he died told his parents, Chuck and Mary Hansen, what the couple had suspected from the moment they lost their son: The folds of Evan’s brain and top of his spinal column were speckled with the plaque Tau. This young man had developed chronic traumatic encephalopathy, the degenerative and incurable disease linked to repeated hits to the head and found in the brains of so many deceased football players.

The brain is a fine-tuned instrument, and it is difficult to draw definitive correlation between a degenerative disease and suicide, that loneliest of ends. Young men are at greater risk of suicide than young women. That said, depression is a handmaiden of C.T.E., according to those who have studied the disease, as are short-circuited memory and a sense of bewilderment, and all those problems haunted Evan in his final months.

Evan’s father and mother, Chuck and Mary, invited me recently to talk at their kitchen table in a handsome brick home on a cul-de-sac north of Indianapolis, surrounded by photos of their three sons, strapping young men with big smiles. Evan, 6-foot-1 and 200 pounds, began to struggle with depression when he was 19, they said, by which time he was in his 11th straight year of playing tackle football with that relentless abandon of his.

“He was fearless and not afraid of pain,” Mary said. “Stick your nose in there. He loved the game.”

As afternoon yielded to twilight, the couple spoke of their son in tenses that alternated between present and past. They have decided to speak publicly about his brain injuries and his struggles with depression. With their words, they hope to lead other parents to an understanding of C.T.E., and to a more cautious relationship with tackle football.

The Hansens are observant Catholics and believe in providing succor. Evan volunteered at his church, working as a Spanish translator at a food pantry for homeless and poor families. At Joe’s Butcher Shop, he would greet regulars with a buoyant hello and a touch on the arm. At school he ran in no jock clique. More than once, parents asked him to speak with their children and help work through one adolescent struggle or another.

Then depression’s whirlpool began to tug at him.

Mom, Evan said, my life is so good and yet I feel dark.

Evan saw doctors and took medications, although those made him feel worse. (There is no medication or cure for C.T.E.) But he did not withdraw from the world. He was so close with his former girlfriend, Brianna, that he often stopped by and talked with her parents. Her father, Steven Shackelford, had been his high school defensive coach.

Shackelford also stopped by the Hansen house to talk about Evan. He recalled when he first heard of this hotshot high school freshman, and figured, OK, all right, let’s see. He laughed. “All of the rumors were true,” Shackelford said. “If I had a son, if I could have picked a husband for Brianna — ”

He fought for composure.

“Evan was the model. He set the bar.”

In early September 2018, his parents said, Evan logged on to his laptop and looked up C.T.E. and Jason Hairston, a former college football star who committed suicide and was later found to have C.T.E.

“Evan was having short-term memory problems,” Mary said after finding those searches on her son’s computer after he died. “And he was tired.”

Silence fell and Chuck added: “He believed he had C.T.E., and maybe he didn’t believe he could handle it anymore.”

On senior day at Wabash in September 2018, Evan had dinner with his parents, laughing, eyes sparkling. He went to a fraternity party and the next day attended team meetings with the coaches. He spoke of coming games against Wabash rivals.

That night he slept at a classmate’s home, set amid forest and corn fields. The classmate went to work; Evan rose, found a gun and walked into the woods. He made three phone calls to 911 and hung up each time.

Chuck looked at the navigation signal on his son’s phone and realized the locator had not moved and that stirred concern. He traveled to that signal and found his son’s body.

Chuck spoke quickly, sentences rolling one upon the other.

“How it got so bad so fast is what confused us,” he said. “One minute he’s texting with friends and then he got ahold of a gun and fell on his sword.”

The unavoidable question is about the toll taken by football. Evan began to play tackle in third grade. He made the Guerin Catholic High School team as a freshman and played on it for four years, at running back on offense and middle linebacker on defense. He played four years at Wabash. He had knee surgeries, broke fingers, wore a strap to keep his shoulder from dislocating. And he never asked out of games.

Football gave Chuck and Mary’s high-spirited smiling boy so much pleasure and let him find himself as a leader. Yet that passion became his undoing, and they feel obliged to talk of it.

“Evan loved football and we loved watching him,” Chuck said. “It’s such an ingrained part of our culture, to even say anything bad about it is like saying something bad about the pope.”

Thirteen hundred people crowded into the pews at Our Lady of Mt. Carmel Church for Evan’s funeral. Mary and Chuck stood on the receiving line for five hours, comforting those who came to comfort them. Then they took Evan to Our Lady of Peace cemetery, where they laid his body to earth between two young oak trees.

We talked into the winter night as Mary and Chuck showed me photos of their smiling son. You must, I offered, be tired. They shook their heads.

“This is the promise I made to Evan a few days after,” Chuck said. “I told him: ‘I’m not mad at you. I know you were in a lot of pain and we’re going to find out what the heck happened and hopefully we’ll save some other young men.”