For the Yankees, Astros’ Punishment Brought Anger and Vindication 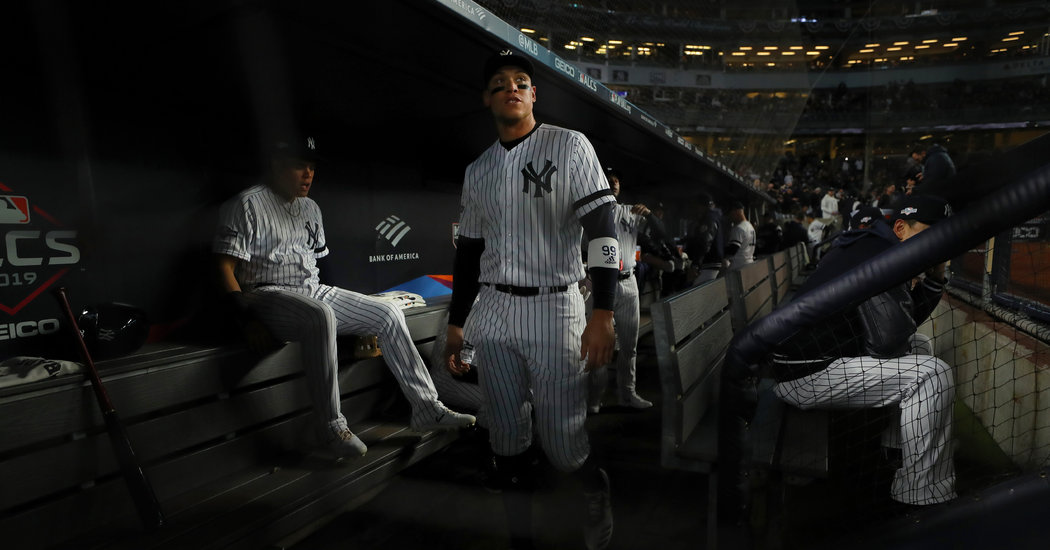 In the days after M.L.B. delivered its damning report on the Houston Astros’ cheating scheme last month, a complex mix of emotions began flowing for the players and staff of the Yankees.

The scandal rocked the entire baseball world, but only one team had lost to the Astros twice in the postseason since they implemented their sign-stealing operation three years ago: The Yankees, who fell to Houston in the American League Championship Series in both 2017 and 2019.

There was, of course, anger over the postseason losses to a deceitful opponent, and a clear sense of schadenfreude: Aroldis Chapman, who gave up key runs to Astros hitters during both A.L.C.S.’s, posted a meme of Michael Jackson eating popcorn and smiling with the caption “ME WATCHING ALL THE ASTROS CHEATING DRAMA GO DOWN.” His teammates Aaron Judge, Gleyber Torres and Luis Severino all piled on with laughter emojis.

But for many in the organization, there was a strong sense of validation, because M.L.B.’s report confirmed what the Yankees, among other teams, had been trying to figure out for some time about the Astros.

Fears that the Astros were skirting the rules had bubbled under the surface for years, including in the Bronx, after Houston rapidly transformed itself from one of the worst teams in baseball to a perennial contender.

Paranoia about opponents stealing signs between pitches and catchers has existed throughout baseball history, but the explosion of technology and instant replay in the game introduced new fears, as well as new ways to exploit the rules. All teams were looking to gain an edge, and the Astros had cultivated a reputation as being on the cutting edge of technology in nearly every aspect of the organization.

So teams like the Yankees had been vigilant about their rivals. During the 2017 regular season, they told M.L.B. about video that the team believed showed a member of the Boston Red Sox training staff looking at an Apple Watch in the dugout during a game, and then relaying a message to players who, in turn, signaled teammates on the field about what type of pitch was about to be thrown.

The Yankees, also a technologically savvy team with a robust replay review operation, have not been immune to accusations of themselves over the years, including the Red Sox’ counterclaim at the time that the Yankees had used a YES Network camera to inappropriately steal signs. (Any use of technology to decode or relay opponents’ signs during a game is illegal.)

The relatively minor scandal over the Apple Watches ultimately had huge implications. After investigating and fining the Red Sox — and the Yankees for a lesser infraction involving the use of a dugout phone — M.L.B. sent a strong warning that team leaders would be held accountable for such continued behavior.

That provided the basis for the yearlong bans for former Astros Manager A.J. Hinch and General Manager Jeff Luhnow, both of whom were subsequently fired by team owner Jim Crane. It could also ensnare Alex Cora, who was let go by the Boston Red Sox over his role in the cheating scheme as the Astros’ bench coach. (Cora is awaiting his punishment while M.L.B. investigates the Red Sox for potential illegal use of live video feeds to steal signs during their World Series-winning season in 2018.)

The Yankees had also been particularly wary of the Astros, at least since their World Series victory in 2017. So were several others: Executives from Houston’s rivals were even comparing notes on how they thought the Astros might be cheating. Though the Yankees could not quite figure out how it might be happening, they had been sending any evidence they deemed fishy about the Astros to M.L.B. over the past few seasons.

It took Oakland Athletics pitcher Mike Fiers going on the record with The Athletic in November about his former team’s misdeeds to break the dam and spark M.L.B.’s investigation.

There were a few clues before Fiers went public. In August 2018, the Athletics reported to M.L.B. that the Astros were clapping before pitches, with Oakland believing it was an attempt to relay stolen signs to batters, according to a Yahoo Sports report that year which also mentioned trash can banging.

Earlier that season, during a series at Yankee Stadium, Brandon Taubman, then Houston’s senior director of baseball operations, confronted and threatened a Yankees employee who was filming with a high-tech camera from center field. The Yankees had M.L.B. permission to use the camera since it was nonlive footage for scouting, but Taubman, as part of the Astros’ de facto anti-surveillance team, was playing defense against rivals’ potential sign stealing. (A year later, Taubman was fired by the Astros and banned from M.L.B. for inappropriate comments he made toward female reporters after Game 6 of the 2019 A.L.C.S.)

The Astros’ behavior worried the Yankees enough to prompt extra caution on the diamond. The Yankees instructed their pitchers to frequently change their signs, and gave them cards to place under their caps as reminders of the many variations to cycle through during games. For example: Even with no one on base against the Astros in the 2019 A.L.C.S., Yankees pitchers and catcher Gary Sanchez cycled through different sets of signs.

When the Yankees noticed whistling coming from the area of the Astros dugout during the same playoff series, they thought it was being used as a way to pass signs to batters, and they immediately alerted M.L.B. The league investigated that case but said it had found nothing awry.

Even though a few Yankees coaches were angry at the Astros over the whistling then, Yankees Manager Aaron Boone struck a calmer tone publicly, insisting he was not concerned about the Astros. But in December, after the Athletic story came out, Boone admitted that the allegations were “eye-popping” and “eye-opening.”

No Yankee, however, voiced more displeasure than C.C. Sabathia, the longtime pitcher who retired after the 2019 season and was recently named a special adviser to Yankees General Manager Brian Cashman. In a television appearance and on his podcast, Sabathia essentially spoke for many in the organization. (M.L.B. instructed teams to refrain from commenting on the Astros’ punishment, but players, who are protected by a union, are freer to speak their minds.)

“As everything’s been coming out, and the more facts that we get, it’s getting frustrating, man, to sit here and know that late in my career I could’ve had a title — maybe ’17 or maybe ’18 — but we got cheated out of a team kind of doing something that’s not within the rules of the game,” Sabathia said last month on Showtime.

Sabathia also said the Astros’ 2017 World Series title should be vacated, joining a chorus of other voices suggesting the same. M.L.B. is not inclined to strip teams of titles, but it did strip the Astros of a handful of key draft picks and $5 million.

That did not quell widespread dissatisfaction and questions over the punishments: The Astros still get to keep their title? The Astros players, and its owner, went unpunished by M.L.B.? Executives of opponents who lost to the Astros during that period have also wondered over the past several weeks: Where is our apology?

The Astros’ cheating scandal will hover over the sport for some time, particularly when Houston and the Yankees face off again. Despite much change in their leadership ranks and losing a few key players to free agency — most notably the star pitcher Gerrit Cole, who joined the Yankees — the Astros are still expected to contend for another title this year. Their talented core of players remains mostly intact.

But this time, the Yankees appear better on paper, and Vegas oddsmakers seem to agree, already labeling them as the leading 2020 World Series favorite. If they do get revenge after all, it may happen on the field.