Depth of Field: Where Is Jay-Z Taking the NFL? 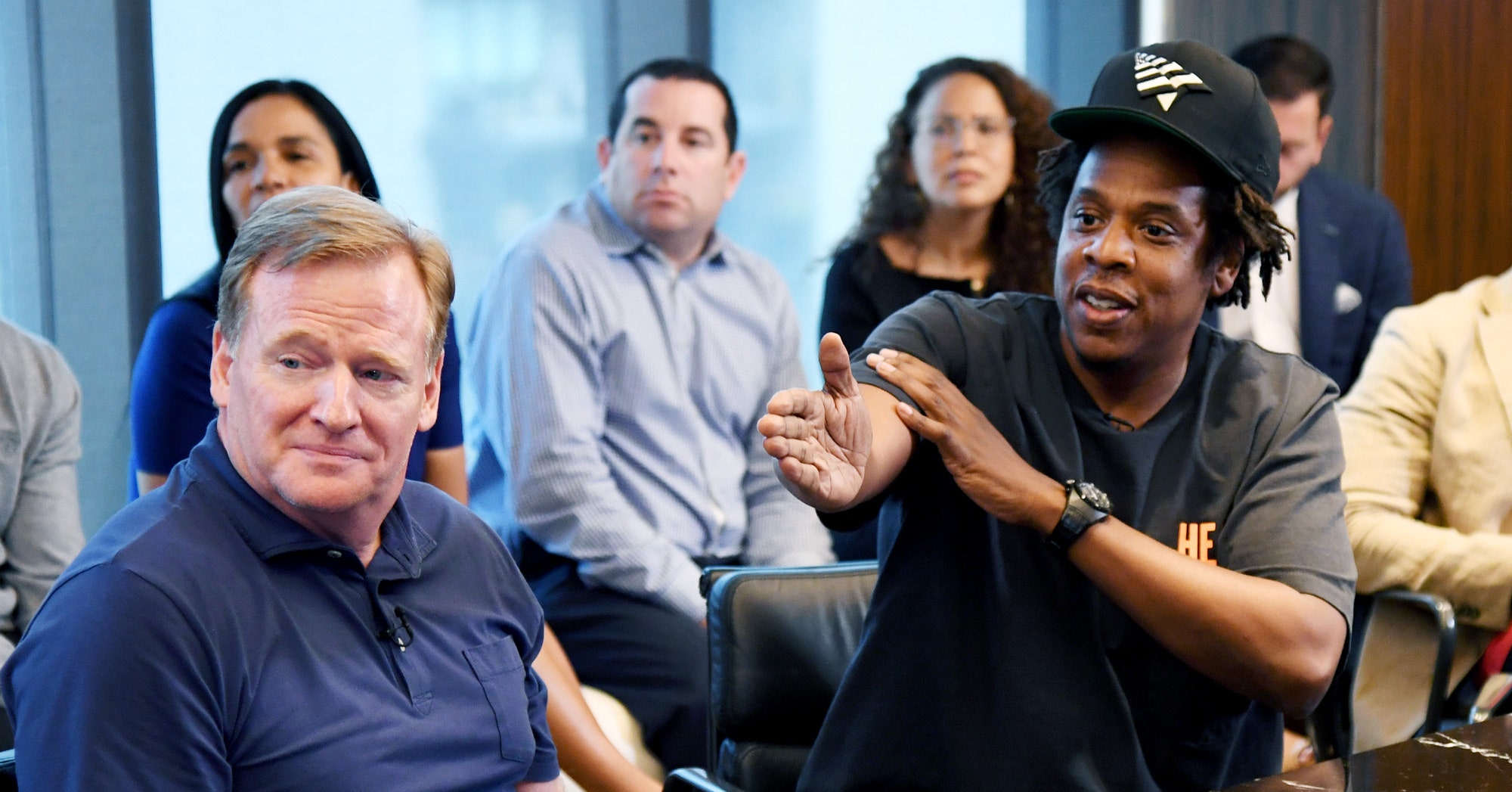 In the National Football League’s kingdom of stunted progress, what you see is not always what you get. For decades the NFL has tried to scrub difficult political and social discourse from its brand. This has meant keeping the games going even as the league faced everything from domestic abuse cases to brain injuries. But if there is one thing the NFL understands, it’s the politics of business. And good business is often built on illusion.

Three years to the day after former San Francisco 49ers players Colin Kaepernick and Eric Reid decided to take a public stand against racial injustice (particularly the rise of police brutality against black men)—by kneeling during the national anthem, which, to the displeasure of league executives and team owners, caused a wave of player solidarity and an unofficial exiling of Kaepernick—NFL commissioner Roger Goddell met with rapper-entrepreneur Jay-Z to announce a social justice partnership with Roc Nation, the management agency Jay-Z founded and runs. Per the announcement, Roc Nation will consult on marketing and music events, including its crown jewel, the Super Bowl halftime show, and help the league to bolster its activism initiative, Inspire Change.

Anyone keen on the matter understood it for what it really was: a well-calculated smokescreen. Even if the NFL means well, it’s hard to not see the joint venture as a ploy to purify its image and silence critics who believe what Kaepernick symbolizes. That the former pro quarterback was missing from the meeting only seemed to spotlight the chasm that the league still refuses to confront.

Twistedly enough, that’s what draws me to Kevin Mazur’s photo from the news conference, which was held in Roc Nation’s midtown Manhattan offices on Tuesday. The image hints at the mirage of access; it’s about the hollow spectacle of direction and the lies we tell ourselves in the name of business. In recent years, Jay-Z has taken on a more forceful role as a social justice advocate. Using his celebrity and sway, he helped produce the 2017 Kalief Browder documentary and bring attention to the rampant judicial bias rapper Meek Mill (who is signed to Roc Nation) has come up against, all of which is documented in the new Amazon series Free Meek. The obvious friction pulls from two sides: the rapper’s long claim as an avatar for American capitalism—the line “I’m not a businessman/ I’m a business, man” is one of his most indelible—versus his work as a champion for social justice. What identity is to be believed?

Photography is all about direction: Much of what we witness is colored by the direction in which the photographer has chosen to point their camera—shots from high above or peering from the ground up; angled captures that pulse with fire; or, say, the vivid and vulnerable directness reminiscent of Carrie Mae Weems portraits. And yet so much more of photography is about the direction of the subjects within the photo. Where are they headed? What do their movements—darting eyes, hands raised in panic or jubilee, faces haloed in sunlight peering at each other on a park bench—suggest about the larger narrative the photographer is attempting to tell?

In Mazur’s photo, Jay-Z’s right arm is pointed like an arrow. Goodell looks in the same direction, as does everyone else in the frame. It’s irresistible that way. What is Jay talking about, and why is everyone so rapt? Here’s a Brooklyn-born kid who made good, raised himself up from the projects, became one of the most recognizable names in pop music, and can now claim status as a self-made billionaire. It’s the kind of story you want to believe in. But then you stare a beat longer, holding your gaze, and the mirage begins to wither.

Illusion works both ways: It’s as much about who is in the photo as who isn’t. You ask yourself, Where is Kaepernick or Reid, the two players who sparked the protest? Why are other players who’ve since scrutinized the league, especially those who comprise the Players Coalition, absent from the meeting? That’s the danger in illusion, especially one cast by the NFL. Even though one might see through its hollow spectacle, there’s little to be done to break its spell. Jay-Z commands attention and everyone looks on, ghostly captivated. His arm stretches into an unknowable future. There are those who will follow, and others, who will rightly wonder: Is this the right direction?