Chargers Get Bold and Beat Chiefs on 2-Point Conversion 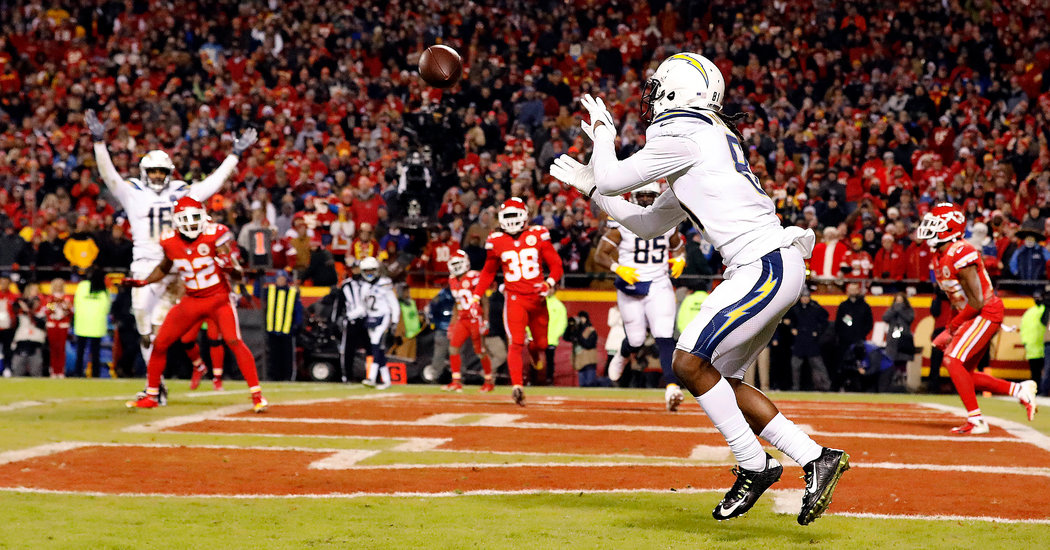 It was a game of long drives and miraculous catches. There were unknown running backs breaking off huge runs and a star safety returning to reinvigorate a previously hapless defense.

And in the end, the game was decided by a shockingly bold decision to go for a 2-point conversion rather than kick an extra-point and settle for overtime.

It was one of the most surprising ends to a game all season, with the Kansas City Chiefs leading by 14 points with less than four minutes to play only to lose to the Los Angeles Chargers, 29-28.

That Los Angeles was able to pull off the road upset against the A.F.C.’s top team would have been surprising in any week, but that they did it without running backs Melvin Gordon and Austin Ekeler, and with almost no help from top receiver Keenan Allen, made it truly something to behold.

“We just kept playing,” Philip Rivers said in an on-field interview just after the game ended.

[N.F.L. Week 15 Predictions: Our Picks Against the Spread]

With a win, the Chiefs would have not only clinched the A.F.C. West but also a first-round bye in the playoffs. They seemed to have done just that early in the fourth quarter when Patrick Mahomes ended a punishing 13-play, 73-yard drive by handing the ball to Damien Williams for the running back’s second touchdown of the day, stretching Kansas City’s lead to 28-14.

From there, however, it was all Los Angeles. Philip Rivers may have thrown an interception on his first pass of the game — ending a streak of 103 passes without one — and then a second one later in the game, but he reeled off a pair of fourth-quarter touchdown drives, taking advantage of the Kansas City secondary, which faded heavily after a strong start.

Rivers passed for 313 yards and two touchdowns, but it was the veteran quarterback confidently marching onto the field for a 2-point conversion after Mike Williams’s 1-yard touchdown in the game’s final seconds that showed how special this Chargers team can be. With no hesitation at all, Rivers once again threw to Williams, putting his team on top to stay.

Rivers, who talked about what a great place Arrowhead Stadium is to play, credited Coach Anthony Lynn with the decision to go for two rather than tie things up.

Los Angeles, which fell behind, 7-0, after Rivers’s first interception led to the Chiefs opening a game with a touchdown for the eighth time this season, had never led before the 2-point conversion. The Chargers had seemed overmatched by Mahomes, who repeatedly found ways to step out of sacks, extend plays and extend drives, and were being smothered by a defense that was bolstered by the return of Eric Berry, a standout safety, who had been out for more than a year.

Mahomes completed 24 of 34 passes for 243 yards and two touchdowns and did not commit a turnover, but late in the fourth quarter, with a chance to put the game away, he came up empty, going minus-5 yards in three plays before punting the ball back to the Chargers.

The loss for Kansas City opened up the possibility that the Chiefs could be overtaken by the New England Patriots, or even the Chargers, for home field advantage in the A.F.C. playoffs, but with a playoff spot already clinched and a first-round bye still likely, the stakes were relatively low. Similarly, the Chargers’ fortunes did not change much — at least not yet — as they still trail the Chiefs in the A.F.C. West thanks to the tiebreaker of a better division record.

The Chiefs will try to get back on track next week when they travel to Seattle for a difficult matchup with the Seahawks, while the Chargers hope to stretch their winning streak to five games with a home game against resurgent Baltimore.